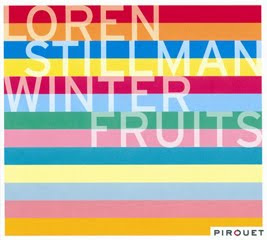 Oranges in February? Not a likely find outside the confines of the local supermarket. Rare too are the jazz ensembles containing an organ that opt to work largely outside the ingrained soul jazz traditions of the instrument. Altoist Loren Stillman hits the challenge head-on, though it’s not exactly a new avenue of expression in his discography. The instrumentation also has origins in The Brother’s Breakfast, a Stillman disc for Steeplechase that also marked his first collaboration with organist Gary Versace on record.

Stillman’s been something of an accolade magnet over the last decade, scoring an impressive array of encomiums from critics and colleagues through a regular gig calendar and a steady stream of releases, most recently on Pirouet. His name headlines the disc, but it’s more accurately described as a collaborative affair. The quartet operates under the band name Bad Touch, having self-released an EP back in 2008. This set is different still though the core relationship between the two holds as a key creative pivot. Stillman’s feathery, Konitz-tinted tone and lithe, snaking phraseology immediately set him apart the bulk of the saxophone lineage commonly associated with organ sessions.

Versace is just as singular and versatile, with a sharp command of stops and settings and layered oblique way with shaping solos and support that immediately turns the mental page to Larry Young. There are segments where he goes for a churchy sort of sound, but not that of a fiery Baptist chapel, but instead the sort of slithery, insinuating cast more common to meditative liturgical mass. His proficiency at shadowing and buttressing Stillman’s spooling phrases parallels that of guitarist Nate Radley who also goes for a liquid, lubricious tone when working his frets. Drummer Ted Poor parses complex, tension-wound beats from a position erring on restraint and he seems just as amenable to laying out as the situation dictates.

Stillman’s writing (all of the compositions save the opening “Muted Dreams” and the title track come from his quill) is ripe with mood-laden detours and eliding asides. The sense of tonal compatibility remains strong with alto, guitar and organ overlapping and at times almost indistinguishable in an airtight, but supple weave. It’s an obvious product of mutual respect coupled with fertile rehearsals and performance. Season to crop alignments like the one described in the project title may be scant but the quartet here makes a convincing case for successful application of organ outside its customary contexts.
Posted by derek at 5:48 PM