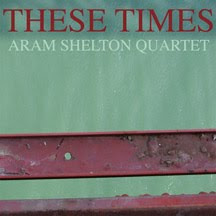 Pressed on Aram Shelton’s own imprint, this modest album is a logical minor variation on the reedist’s long-standing partnership with saxophonist Keefe Jackson in the Fast Citizens, a collective that’s recorded twice for Delmark. Both horn players have strong ties to the Chicago creative pool that is now several iterations onward from the Vandermark-led vanguard of a decade earlier. The variant in this case is drummer Marc Riordan, a new recruit who fits with the extant ensemble like a moistened reed in mouthpiece.

With Shelton’s name on the masthead four of the six compositions naturally come from his quill. Of the remaining two in the set, Jackson and bassist Anton Hatwich take one apiece. There’s a similar equilibrium regarding Shelton’s choice of reeds as the alto pieces serve as bread slices to the clarinet cold cuts in the programmatic sandwich. He name-drops Ornette, Johns Tchicai and Carter as muses and the pieces loosely reference freebop frameworks established by those storied progenitors in using brisk pretzel-patterned themes as sources for collective improvisation.

At this point Shelton and Jackson share a rapport that makes sessions like this one sound somewhat effortless even though the collaborative energy spent to get there was obviously deep and rewarding. On the opening title piece, the pair negotiates a see-sawing unison theme before dropping out and leaving Riordan’s brushes front and center. Shelton bats first with a solo steeped in jittery intervallics followed by Jackson in similar form before a tandem marked by lean vertical riffing by the former and blustery forward momentum by the latter.

On the Jackson-scripted “Rings”, Shelton’s mercurial clarinet makes for an even sharper tonal contrast to the composer’s tenor and the riff-lead roles reverse. Bass and drums buttress and challenge from their flanking positions, drawing respective lines in bold primary colors. Hatwich’s “Relief” moves from a feature for Riordan to overlapping legato lines from the saxophones that ramp in density and intensity before a surprisingly sedate and lyrical coda. Shelton’s “Rise and Set” reflects its title galvanizing horn fisticuffs giving way to bass and drums interludes and onward to a cathartic release.

At just over 37-minutes it’s a relatively short set, but that built-in brevity isn’t a minus given how well everything holds together. Considering that other titles on Shelton’s young label have lapsed out of print this isn’t one for interested parties to sleep on.
Posted by derek at 5:40 PM