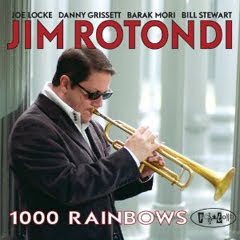 Contextual questions of excessive repertory fealty are largely moot in the music of Jim Rotondi. A trumpeter who’s canny style blends Hubbard-like velocity and clarity with a persuasive lyricism, his fixation on a stripes of hardbop steeped in 60s Blue Note decorum is hardly worth getting bent about, though there are those who would likely fault him for it just the same. This set couples his lubricious brass with Joe Locke’s vibes and a standard rhythm section for a nine-song program that moves along at a brisk and mannered clip from the opening incisiveness of “Bizzaro World” through the lovely tone poem closer “Not Like This”.

Locke is a veteran player versed in a set of antecedents similar to those favored by his employer. He’s also imbued with a comparable instrumental command that engages multiple mallets in the crafting of complex melodic leads. He and Rotondi make for sharply cast team in the company of pianist Danny Grissett, bassist Barak Mori and drummer Bill Stewart, all of whom unflappably fulfill their respective roles. Mori and Stewart don’t get much in the way of solo space, but each man still makes his presence known through cogent and creative support.

The set list combines a handful of originals with a small clutch of tunes culled from popular songbooks. Buddy Montgomery is the source of the title piece, a lush ballad piece bracketed by soothing ensemble statements. Lennon and McCartney’s “We Can Work it Out” is thankfully denuded of most of its pop baggage, the unison theme working surprisingly well as a blowing vehicle for the two principals. It’s a very pleasant and well-parceled program, one filled with numerous platforms for the leader and Locke to strut their chops. Again, the collaborative catalogs of Hubbard and Hutcherson aren’t too far out of mind when listening to tunes like “Gravitude” and “One for Felix”. That’s hardly a trait worth a grimace or a grouse.
Posted by derek at 11:18 AM