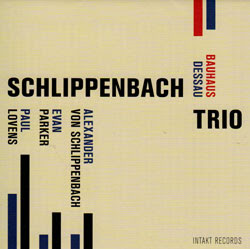 The Schlippenbach Trio’s latest release is an album couched in celebratory anniversaries: the ensembles 40th coupled to their chosen venue’s 90th. Recorded at the vaunted German playhouse in the fall of last year it recalls their last Intakt outing in that saxophonist Evan Parker leaves his straight horn capped and cased. The resulting focus on tenor is something of a treat though it also means that his circular breathing feats of stamina and precision play out with comparative brevity and tempered speed on the larger horn. Rather than a detriment, it makes for a fascinating contrast. The tenor-centric nature of the set also precipitates the greater presence of jazz elements in his playing as interplay that ensues.

For their parts, pianist Schlippenbach and drummer Paul Lovens sidle back into their customary positions on bench and stool, respectively. The three players subscribe to a framework familiar from countless past concerts with a lengthy sectional piece followed by two shorter encores. At this point in their venerated partnership the thrills come through discovering how they shave away the weight of precedence and keep the long-standing shared vernacular free of hindering predictability. One thing remains certain, the tones and structures hatched upon are well enough removed from the litanies loosed on storied conclaves prior.

Play-by-play hardly seems prudent as the three hit their reliable strides and pacing, peeling off into duos and solos along with ensemble statements that fluctuate between heated and measured. Parker spools out some lushly nuanced melodic playing, particularly on the pair of encores, and it’s a vector buttressed by his partners from their own corners of the stage. Lovens manages his hat trick of assembling asymmetry, color and momentum without a sacrifice to any constituency. Schlippenbach scurries adroitly up and down his keyboard, expertly working the pedals for added gravitas while keeping a variable bead on his colleagues’ compass points. In sum it’s that rare breed of professional improvised performance, one that keenly calibrates fervor with skill.

The Schlippenbach Trio’s last Bauhaus hit was 28 years ago, a time lapse all but erased by the fresh scattershot of musical manna imbedded in the venue’s vaulted architecture this second go round.
Posted by derek at 7:33 AM