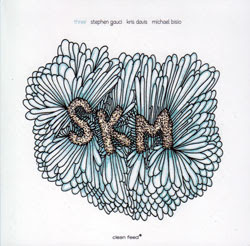 Operating under the ostensible leadership of saxophonist Stephen Gauci, but still very much an ensemble affair, versatility factors prominently on this straightforward trio set. Gauci and bassist Michael Bisio are well-established colleagues, their associations formed in the last decade on a number of projects for CIMP. Canadian pianist Kris Davis moves in similar circles having worked with New York notables like Tony Malaby and Tom Rainey. Their rapport manifests right away, stressing spontaneity rather than any predictable path with their instrumentation. It’s a “down to brass tacks” approach echoed in a simple initials-as-album title summary.

All but one of the program’s eight pieces is collectively composed. Only “Now” sources from Bisio’s pen, a solo feature for his signature emery board arco bass. Gauci sits out the opening minutes of “The End Must Always Come” setting a precedent that shapes the other tracks in the set. Sharply drawn duos and solos thread through various pieces with Davis and Bisio frequently pairing off for tightly braided interplay. The bassist is no stranger to pared down settings in the company of a piano and that familiarity serves him well here.

Davis responds in kind though repetitive aspects of her playing grate on occasion. In the closing minutes of the aforementioned opener she locks on an ostinato pattern wears it down to a nub as Gauci flutters in circles around her. It’s an action wrought with intent, but one that ends up sounding overwrought. “Something From Nothing” takes the tactic to an even greater extreme, barely equating with its title as the three musicians built a constrictive repeating weave from the barest of rhythmic materials. It’s an initially interesting exercise in self-imposed group parameters that ultimately feels overly hermetic.

Other pieces like the comparatively aerated Gauci/Davis duo “Groovin’ for the Hell of It” fare better in speaking to the trio’s strengths. Davis’ dusky and staggered chords have a Bley-like luster to them and Gauci’s fastidious feather-duster tone plies in the service of suitably diagonal phrasing. Those comparisons bring immediately to mind the classic Giuffre trio, but it’s really just a surface point of comparison. Balancing liberating extemporaneousness within the context of carefully considered structures these three players arrive at a music that both invites and largely withstands close scrutiny.
Posted by derek at 10:36 AM