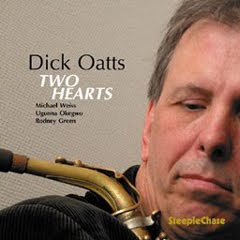 Ballad projects can be dangerous prospects for the sentiment-sensitive saxophonist. Dip too deep into the romance bag and the results run a strong risk of coming across as treacly or trite. Constrict the emotive spigot and the outcome can be construable as bland or aloof. Midwestern mainstay Dick Oatts is well-acquainted with negotiating such obstacles of temperament over a professional career that spans nearly four decades. Counting sideman and jam session appearances this is his nineteenth title for Steeplechase though it dates back to January of 2009. Pianist Michael Weiss, bassist Ugonnna Okegwo and drummer Rodney Green are regular Oatts confreres. Bassist David Wong pinch hits for Okegwo on three pieces without upsetting the programmatic flow.

The ten tune set is an assemblage of notable standards, all of which have revolved through the Oatts playbook at one time or another. It’s testament to Oatt’s improvisatory powers that such a program can still yield green pastures for his horn. A medium-slow tempo sortie through “If I Should Loose You” starts things off in relatively sedate fashion with the rhythm section offering up a warm accompaniment the leader’s ranging alto. Slower pieces actually offer more succulent fruits starting with the lilting interpretation “We’ll Be Together Again”. Oatts sounds even more inspired on Ellington’s “Come Sunday”, his by turns plush and piquant tonal shifts accentuating the aged standard’s beatific theme. Weiss works well as frequent foil, his deft chordal work aligning with the steady throb of Okegwo and the skeletal rhythms of Green.

Raising the tempo a couple ticks, “Yesterdays” brings a dark edge of Weiss’ rolling, pedal-weighted momentum and some acrobatic emoting by the leader. The mood shift proves short-lived thanks to the soothing trifecta of “My Foolish Heart”, “Darn That Dream” and “Angel Eyes”. Echoing the intimation of its concluding foray through “Hello Young Lovers”, this is an album to savor in the company of a spouse or lover, snifter of top-shelf cognac and comfortable couch at the ready to see what develops.
Posted by derek at 8:42 AM