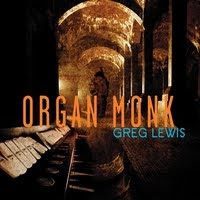 Don’t let the barefaced cover art on this one act as a disqualifier before disc meets laser. Organist Greg Lewis might be a bit lead-handed with his monastic imagery, but his work on the B-3 is brimming with shades and subtlety. It certainly helps that the side-persons he’s chosen for the date include the redoubtable Cindy Blackman and a new name to me, Ron Jackson, on guitar. All but one of the disc’s fifteen tracks come from the songbook of Thelonious, a brave move on Lewis’ part to begin with given the preponderance of tributes past and present to the inestimable hat-and-bearded composer.

Lewis hardly seems stymied by the challenge inherent in saying something new with the time-tested material. In fact he goes it better by not shying away from the humorous and downright weird. His command of his console is startling complete, beginning with a burning take on “Trinkle Tinkle” where he plies the spiral staircase melody without missing a beat. The corkscrew freefall of “Four In One” falls similarly in line under Lewis’ nimble digits. Elsewhere on “Criss Cross” he combines the floating atmospherics of Korla Pandit and Sun Ra as Blackman builds tension and release accents for a spate of bracing contrasts. “Boo’s Birthday” contains a swirling church-inflected prelude before the trio states the theme proper.

Lewis’ has obviously internalized the masters of pedal-built organ bass from Smith on down through Holmes. His corpulent patterns balance tonal weight with adroit articulation as during the frothy give and take with Blackman on “Played Twice”. Jackson shifts between thick bacon-cut comping and cleaner single note solos. In the latter capacity he sometimes almost sounds like an extension of Lewis’ keys so close and custom-calibrated are his chord voicings. His solos are fewer in frequency than those of his employer, but he makes them count, as does Blackman most commonly within the context of drum breaks.

A word also seems warranted regarding the disc’s artwork, which includes a stylized tray card photo of a shirtless Lewis seated, his nude wife straddling him as their infant soon coos nearby from a baby rocker. It’s a striking image and one initially incongruous with the music. Lewis’ visuals may err on the obvious, but his take on Monk’s music preserves that reservoir of spontaneity so often depleted from the tunes in the hands’ of other interpreters. This is certainly a set to audition for jaded listeners who’ve all but given up on the organ’s application as a vehicle for singular expression.
Posted by derek at 8:40 AM