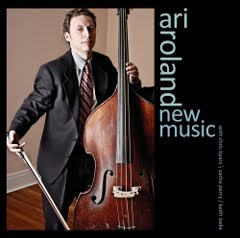 Bassist Ari Roland doesn’t mince words with the title of his latest disc. The summarizing phrase is succinct just like his preferred style of soloing on his instrument. While the seven compositions are indeed fresh creations, they still align quite closely with the extant occupants in his songbook. That familiarity extends to his sidemen as well, players who are equal-footing peers rather than subordinates. Saxophonist Chris Byars fields both alto and tenor to the session, playing each in the by turns darting and droll, dry-toned language that is his common parlance. Pianist Sascha Perry and drummer Keith Balla don’t break with established character either, Perry, in particular, showing his prowess when its time to comp. The pleasingly executed program is a jazz corollary to comfort food, warm and comparatively conventional in a positive connotation like a plate of home-cooked meat and potatoes.

As with past outings, Roland sticks to his stock strategy of pizzicato in the ensemble passages and arco for the solo improvisations. His sharp, see-sawing strokes on the latter passages still manage to swing despite the relative rigidity of their implementation. Balla switches deftly from sticks to brushes for such occasions, enhancing the beat with swishing accents. Despite the reliable musicianship, the tunes tend to follow similar structures and pacing. The first three pieces cycle smoothly from head to solos, concluding with slight variations on a series of drum-tight exchanges between Balla and the others. His breaks are crisp and propulsive and his comrades respond in kind, but by the third iteration of the basic itinerary on the cleverly-titled “The Finder of Horsehair” the set starts to tip toward tedium. Fortunately, “Station Blues” slows the tempo and open things up, Roland bending bow with leavened urgency and achieving a less astringent tonality in the process.

While the program doesn’t depart dramatically from Roland’s previous records, it still constitutes a satisfying listen. The affinity these musicians share, built from countless hours on the bandstand together, is something of an endangered quality in today’s jazz. The sad news that the Smalls label is also imperiled makes it even easier to ignore the slight sense of déjà vu that pervades the session. Better to have a new date by these players that follows established protocols than none at all.
Posted by derek at 4:40 AM