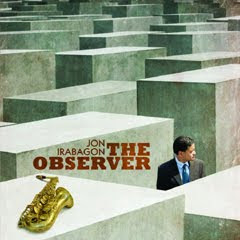 Dream session fantasies are still favorite fodder of many jazz players and interviewers alike. In the case of saxophonist Jon Irabagon a fantasy came true thanks to well-deserved win at the 2008 Thelonious Monk International Saxophone competition. Part of the prize purse was a Concord recording date with the players of his choosing. Irabagon, an improviser renowned recently for his various freer leaning projects, chose fittingly against type. A closer examination of his biography reveals that such a move is hardly out of character considering his eclectic resume includes past gigs with artists as disparate as Tom Harrell, The Pointer Sisters and Billy Joel.

Pianist Kenny Barron heads up his chosen rhythm section also comprised of bassist Rufus Reid and drummer Victor Lewis. Having participated in countless sessions the three veterans embody a gold standard in the postbop milieu and are well up to the challenges Irabagon poses for them. Bertha Hope replaces Barron for a duo interpretation of her husband Elmo’s “Barfly”. Further bucking stylistic prejudices, trumpeter Nicholas Payton, a player in a position similar to Irabagon’s a decade ago, guests on two tracks, the lovely “Joy’s Secret” and the hardbop “Big Jim’s Twins”. Irabagon plays mainly alto, hoisting tenor for just two out of the ten pieces. As icing on the laudatory cake, Rudy Van Gelder handles the recording chores though his presence isn’t a completely propitious one.

A few minor foibles mar what is otherwise a marvelous session, namely Lewis’ clumsily intrusive hi-hat on the opening “January Dream” and the heavy compression Van Gelder assigns to Barron’s keys on tracks like Tom McIntosh’s “Cup Bearers” and “Acceptance” that make them sound akin to a narrowly-applied Rhodes. Listening to Irabagon repeatedly put his partners through a playful but demanding set of paces brings to mind Eric Kloss and his youthful meeting with Miles’ crew of Corea, Holland and DeJohnette. This date conveys a comparable excitement as the elders bear proud witness to a delegate of the younger generation blowing the hell out of his horns and doing so in a manner cognizant of the pantheon that precedes him. Most importantly, it blows apart any attempts to place Irabagon in an idiomatic box and discloses the breadth of talent at his disposal.
Posted by derek at 4:33 AM