Dave Stryker – One for Reedus (Steeplechase) 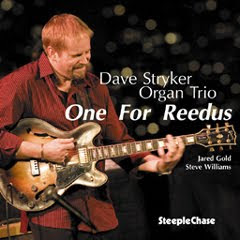 Who or what is Reedus? It’s a natural question when registering the title of guitarist Dave Stryker’s latest date for Steeplechase. Those in the know will recognize the surname of the original drummer in Stryker’s organ trio, a colleague who sadly passed away suddenly just prior to the session. Steve Williams took over kit duties and the date went forward with a newly dedicatory focus.

A quick tabulation reveals it as Stryker’s 16th session for Steeplechase, proof again of the Danish label’s stalwart stewardship of those players selected for membership. Much like tenure in academia, the downside to that security can sometimes manifest in a difficult to resist tendency toward water-treading. Stryker’s process with plectrum is a model of modern mainstream jazz guitar: a pleasant admixture of Grant Green, Wes Montgomery and Pat Martino that jibes fluently with the eight-song program under the trio’s scrutiny even if it hardly ruffles any collars.

Stryker is no stranger to organ trios having recorded with the likes of Larry Goldings and Joey DeFrancesco on the Danish label alone. Digging back a bit deeper into his weighty discography uncovers sessions with Jack McDuff and the Smiths Jimmy and Lonnie. Jared Gold, the cat handling the keys on this date, is at least a generation or three younger than those acknowledged masters but counts impressive sideman work with the likes of John Abercrombie and Oliver Lake among his credentials. Williams’ bonafides are a bit harder to quantify, but his loose, canny stick play fits in right in with the relaxed “blowing session” demeanor of the date.

A borrowing from the Wonka fake book, “Pure Imagination” is easy pickings in both senses of the phrase and Stryker parses the sing-song melody without breaking a sweat. His own “Burn for Ern” ups the stakes slightly with a faster tempo and an extended display of single-note dexterity. The title track siphons from the trio’s soul jazz tank with Gold coming on like vintage Don Patterson and Stryker slathering on gravy-thick chording against Williams’ feather-touch backbeat. “For All We Know” is similarly outfitted, but cooking commences at a comparably slow simmer.

The session’s best cuts are the trio’s readings of Woody Shaw’s “Zoltan” and the Wayne Shorter showpiece “Nefertiti” where ripe modal structures open up the playing considerably. On the ballad side of the session ledger, Wiliams lithe brushes and Stryker’s sterling scalar runs pull “Make Someone Happy” out of otherwise banal surroundings. A practically somnambulistic “Alone Again” doesn’t fare as well despite some pretty playing by all involved. In the context of its contemporaries, the album is a mixed success. As a thoughtful tribute to a fallen comrade it works just fine.


[Steeplechase titles are available direct through Stateside AT prodigy DOT net]
Posted by derek at 5:21 PM