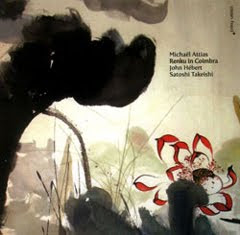 New York-based saxophonist Michaël Attias has a sound steeped in a somewhat unexpected amalgam of sources. He’s obviously enamored of the free jazz canon and players like Jimmy Lyons and John Tchicai, but there’s also a feathery, aerated inflection to his phrasing that obliquely recalls the Cool and West Coast schools of 50s jazz and specifically players like Lee Konitz and Art Pepper. This set, recorded during a three-night stand in Portugal by his quintet in the summer of 2008, pares that group down to a trio for an exploration of six originals as well as Konitz’s “Thingin’” and Lyons’ “Sorry”.

The collaborative Japanese poetry form referenced in the disc’s title is a handy analogue to the ensemble’s dynamic and sound. Bassist John Hébert is Attias’ shadow, his accompaniment and counterpoint so closely aligned with the saxophonist that borders on the extrasensory. Drummer Statoshi Takeishi plays his kit with an ear and touch aligned towards nuance and pacing. Gongs, shakers and other percussion regularly inform the foreground of his patterns, enhancing with color and shading the supple rhythms he sculpts with sticks. The pair’s repartee in the initial minutes of “Do & the Birds” coalesces into a loping processional of bulbous and brittle bass manipulations and muted percussion play that Attais eventually glides across.

Pianist Russ Lossing pops up on fleeting “Fenix Culprit”, changing the chemistry quite dramatically with increased density and momentum. Attias hardens his attack as Takeishi and Hébert work up a heavy rhythmic froth, but the four retreat into pallid tension and release in the piece’s finale. That taste of more aggressive interplay also informs the comparatively tumultuous Lyons’ cover and a genuine groove builds out of the lush back and forth that propels “Universal Constant” but much of the set adheres to a conversely temperate itinerary. Tenorist Tony Malaby, the last member of the quintet, is absent and it’s hard not to pine for his presence given the spark Lossing brings with a brief cameo. Summing up this appraisal with a superficial sports metaphor, the set’s not a slam-dunk, but rather a solid basket from the post.
Posted by derek at 6:28 AM