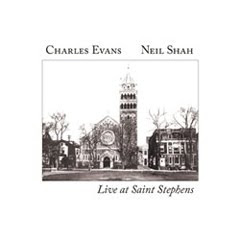 Friends for over fifteen years, Charles Evans and Neil Shah have a shared history that extends well beyond the musical. Their rich rapport rests at the core of this sublime duo concert recorded within the capacious confines of a church in western Pennsylvania in January of last year. Evans supplied the open-ended compositions, the first two broken into parts, but Shah’s role isn’t simply supportive. The two musicians work in keenly close collusion, leading and receding as both the music and the moment dictate to create a recital that transcends the economy of its instrumentation.

Evans’ disposition on baritone saxophone is all-inclusive. An earlier solo release of his carried the title King of All Instruments and in his hands the controversial claim comes across as no idle boast. At various junctures he references the genteel purr of Mulligan, the bluesy brashness of Adams and the pan-register facility of Bluiett. His sweet, aerated lines on the first part of “On Tone Yet” could almost be mistaken for an alto or a clarinet. The resonant surroundings of the performance space act as a natural amplifier for his woollier guises, imbuing sporadic bleats and honks with a grand sense of girth. Shah conveys comparable range at the keys shifting from a skeletal cadence on the piece’s second part to a dense, pedal-boosted display of emotive lyricism in its final third.

The concert’s second half gives way to a series of shorter pieces starting with “Mono Monk”, a ruminative dialogue that taps the titular composer much more in spirit rather than sound. Shah brings to bear more canny pedal sustain for the lovely ballad “An Die Fliegenden Fische” while Evans traffics in the smooth tenor register through his big horn. “What Worked, What Didn’t, What Wouldn’t, What Would’ve” caps the set in humorous fashion though its title is a summation of the set as a whole only in the first phrase. Adding to the poignancy of the performance, Evans and Shah’s high school music teacher was in the audience and would sadly pass away soon after. The set is a fitting tribute to his influence and proof positive that he did a fine job in mentoring both players on their musical paths.
Posted by derek at 8:35 AM