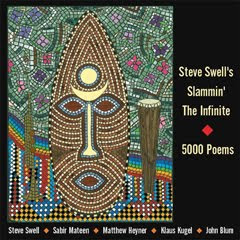 One of the frequent recent criticisms of free jazz argues that there’s just too much of it available on record. Musicians who work within the idiom are accused of placing fecundity above quality control. Trombonist Steve Swell candidly cops to the charge in the brief notes accompanying this fourth release by one of his working bands. Employing a Walt Whitman essay as inspiration, he uses the analogy of sowing many seeds in the hope that at least a fraction will yield a nourishing crop. Passion and personal commitment are cornerstones of Swell’s music. He conveys these traits nakedly through his horn without reserve and is perfectly comfortable with the probability that not all of what he comes up with will hit the mark. That stripe of honesty can be off-putting and easily confused with ham-fisted self-indulgence. Close attention to his music counters that conception by exposing a degree of detail and diversity at odds with the typical free jazz stereotypes.

Swell’s colleagues in his quintet are all long-standing. Multi-reedist Sabir Mateen is the elder of the ensemble and adds a vibrant array of tonal colors on saxophones, clarinet and flute. Pianist John Blum, just recently recipient of renewed exposure via handful of new recordings of his own, has a performance resume dating back decades. Bassist Matthew Heyner, Mateens’s comrade in the erstwhile quartet Test, comes out of his mentor William Parker’s shadow. Lastly but not least, there’s drummer Klaus Kugel whose credentials are similarly ironclad with a percussive approach that balances muscle with poise. All five favor long-form collective improvisation and Swell’s seven compositions are geared toward just that. His writing isn’t just window-dressing to hang wooly solos on and there’s a natural flow between most ensemble and individual statements.

“Sketch 1” divides the band into pairings with Mateen’s flute dancing in extended concert with Blum’s kinetic piano. Swell and Kugel follow for another conversation. Far from the odd man out, Heyner concludes the piece with a solo statement steeped in stirring extended arco techniques. Heyner’s strings are also instrumental in setting the mood on “Where are the Heartfelt?’ and “My Myth of Perfection”, setting up a turgid ostinato on the first and scything high harmonics on the second to set off a slow boil. “Sketch 2” sprawls to six minutes shy of a half hour and it’s here where a little self-editing could’ve been beneficial, but the players otherwise make the most of the space and time accorded. At nearly eighty minutes all told the program isn’t a short trip, but true to Swell’s stated intent there’s plenty to see and hear along the way.
Posted by derek at 4:32 AM