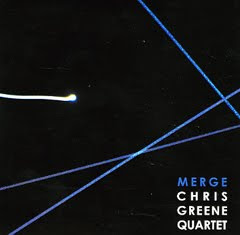 The ancient conundrum “What is Jazz?” crops up in my consciousness whenever I come in contact with an album like this one by Chicago-based saxophonist Chris Greene. Largely unanswerable, it still serves as a sobering reminder that even though I fancy myself an avid and open-minded listener, there are still vast swathes of the genre that fall outside the scope of my taste and expertise. Greene has a lot going for him. The informative liners penned by one of his former music employers that delinate many of the particulars including a strong sense of self, a solid work ethic, and a serious dedication toward developing his craft. Not surprisingly, his working band contains players with compatible priorities. At least on paper they seem like a lock for listener time investment.

The specifics of tracks like the album’s opener “Good Riddance!” swiftly summarize my chief stumbling block. The overarching mood of the piece is closer to David Sanborn than Dave Koz, but the tune still strikes a sour note to these synapses as overly evincing a steep debt to urban contemporary fusion. Sanded down funk rhythms, heavy R&B-inflected repetitions and watercolor synth washes ultimately sink the song despite some strapping blowing by the leader and some sharp retro-Rhodes work by Damian Espinosa. Following in short order comes strike two. “You’ll Thank Me Later” is almost metronomic in its lockstep beat and strictly down the center tenor lead.

Things improve markedly with “M. Tati”, which reveals Greene as both a French film fan and a proficient purveyor of acoustic postbop. Strayhorn’s “Lotus Blossom” is stocked with a similar pantry of standard-friendly jazz chops that give Greene’s gentler ballad interests free rein and the original “Coffee ‘n’ Scotch” mimics the palate-pleasing mixture of its title, moving from Latin meter to a loping straight blues. Applying more weight to the negative end of the scale is the saccharine soprano poundcake “In Confidence”, baked with another custom backbeat by drummer Tyrone Blair that leaves little space for nuance and the closing arrangement of Madonna’s “Borderline” finds the band regrettably channeling their inner early-80s lounge act. With pros and cons counted, the conclusion is Greene isn’t my preferred musical pigment, but if the liners are an accurate affidavit of his prospects he doesn’t need me in his corner anyway.
Posted by derek at 6:30 AM