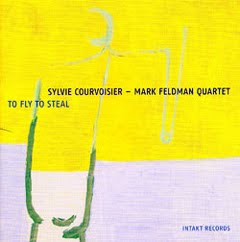 Partners in both music and in life, pianist Sylvie Courvoisier and violinist Mark Feldman share the marquee on their latest collaboration. Drummer Gerry Hemingway and bassist Thomas Morgan aren’t just along for the ride and receptive to a deep rapport, the four create music of superlative communication and cohesion. Their configuration invites immediate chamber associations and much of the interplay leans closer to classical than jazz in general cast, but extemporaneous expression remains an integral element with starched-collar propriety left at the door. The co-leaders contribute two compositions apiece and the remaining three tracks unfold as collective improvisations. As is common credo with Intakt, the fidelity of the recording is dazzlingly clear with everything audible down to the most minute gesture and inflection.

Courvoisier’s “Messiaenesque” finds Feldman in full-bloom virtuosic form, his bow play a blur of pitch-perfect swoops and glissandi complemented by the pianist’s close commentary. The name-checked composer comes to life in the violinist’s sweeping baroque scribbles that arc and angle against a tumbling pulse of bass and drums. Courvoisier and Morgan converse in minimalist increments on conclusion of “Whispering Glades” as Feldman and Hemingway bear silent witness. On Feldman’s “The Good Life”, Hemingway and Morgan converge on a wobbly snippet of jazz swing later annexing much of the piece for extended improvised dialogues punctuated by fleeting theme statements by violin and piano.

Feldman’s “Five Senses of Keen” if full of space and quiet. Courvoisier strums delicately at the interior of her instrument, generating a delicate zither-like cascade at the edge of audibility. Hemingway again sits silent for much of the duration, adding muted accents on shakers and light-touch sticks in a canny less-is-more fashion. The collectively improvised “Fire, Fist and Bestial Wall” unfolds as an impish dance between the participants that becomes feverish in its final minutes but falters in an oddly reticent finish, one of the rare moments where the players don’t sound in accord. Courvoisier’s closing title piece takes wing on a dark-tinged Old World theme, winding down in a tinkling denouement of pattering sticks and keys. Fearlessly willing to explore practically every permutation of its instrumentation, Feldman and Courvoisier have found a vehicle with Hemingway and Morgan brimming with further possibility.
Posted by derek at 10:00 AM