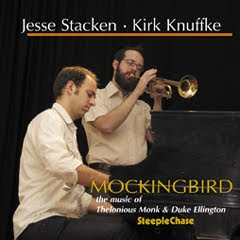 If a Mount Rushmore for jazz is ever erected, Ellington and Monk will surely be among the countenances carved in the rock. Practically every player who chooses the idiom tackles tunes from one or the other at one time or another. That Everest-sized edifice of precedence makes the prospect of devoting an entire album to the composers’ works all the more prone to redundancy. Pianist Jesse Stacken and trumpeter Kirk Knuffke greet any warnings against such an action with a collective shrug. Both have valuable experience playing in free settings, Knuffke in particular on a string of albums for Clean Feed, 577 and KMB labels. That kind of out-of-the-box thinking serves them well in this context as they interpret ten tunes, seven by Monk and three pulled from Ducal suites, in front of an audience at the Bloomingdale School of Music where Stacken teaches.

The duo configuration of piano and trumpet is hardly novel, having its recorded jazz inception in the Louis Armstrong and Earl Hines masterpiece “Weatherbird”. Other partnerships have followed, perhaps most notably and prolifically through the pairing of Ruby Braff and Ellis Larkins in an initial 1955 meeting and subsequent reunions over the following decades. The has even greater similarities to Braff’s later modernist-leaning conclave with Roger Kellaway given the Jaki Byard-like breadth Stacken brings to his constructions on the keys. Knuffke echoes Braff too in a warm, rounded tone and supple phrasing that parallels the elder man’s preferred parlance on cornet. Reference points are superficial though as Stacken and Knuffke speak their own shared language devoid of slavish regurgitation.

Both men are avid conversationalists in counterpoint, their colorful layering on a reading of “Teo” evincing just how complete their rapport. They rightly take clever liberties with the tunes, fixing Ellington’s “Such Sweet Thunder” with stark tango-style syncopation and slowing “Misterioso” to a languorous crawl. The lyrical rendering of “Reflections” is outright gorgeous and the pair follows it perfectly with the bouncing joviality of “Skippy”, Stacken’s off-handed slide into rambunctious stride beneath Knuffke’s burnished staccato. Most importantly, they take their time with the pieces and that unhurried pace pays huge dividends in the amount of space it opens up for the repartee. At just south of 50-minutes the set’s a bit short by Steeplechase standards and as Stacken notes in the notes, a few mistakes occur, but damn if they don’t matter a whit when the give and take that surrounds them is this good.


[Steeplechase titles are available direct through Stateside AT prodigy DOT net]
Posted by derek at 5:36 AM