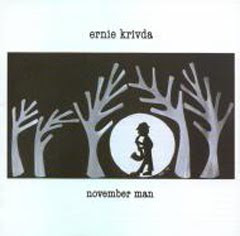 Saxophonist Ernie Krivda remains something of a lonely outlier in the CIMP catalog. Where the majority of the label’s nearly three hundred releases to date favor freer leanings, Krivda hews closer to older conventions in his improvisational style. Postbop-derived melody and rhythm are regular components of his extemporaneous language and his working quintet wouldn’t be out of place on an imprint like Steeplechase or Criss Cross. All this isn’t to categorize his music as colorless or quotidian. To the contrary, Krivda funnels a very personal philosophy through the mouthpiece of his horn, one that welcomes experimentation and risk while retaining fealty to structure and linearity.

Case in question, his eleventh album for the Cadence family, a solo affair that finds him wrestling with the challenges of expression sans accompaniment and coming up with a testimony completely his own. Twelve pieces explore a dozen themes and several magnitudes more in the way of variations. There’s a quaver to Krivda’s tone, not quite a cry, but a translucent vibrato that curiously recalls Ayler at his most tame. His phrasing veers purposefully from lush legato arcs to sharp staccato asides though even at his most expressive there’s an underlying structural integrity to his improvisations. Titles like “Joe, Dave, and the Weasel” and “The Buckeye Road Dance” hint at evasively at intimate referents behind the imagery and Krivda offers brief explanatory tidbits in his portion of the notes, but the music dispenses poignancy through dry-toned, gradually-paced peregrinations.

If there’s a drawback to set it lies in the length of the recital, a robust and occasionally taxing 70-plus minutes that ultimately begins to take on the feel of a hermetic experience. After a good hour, Krivda’s themes start to blur together and it takes a bit of patience to stay the course in a single sitting. Krivda hardly sounds concerned, his concentration devoted instead to getting it all out. His first stab at a solo session three months prior reportedly yielded useable results, but Krivda opted to shelve it in favor of this second attempt. That admirable sense of wanting to get it right pervades the music and it’s a direct reflection of his staying power as an improviser.
Posted by derek at 6:39 AM