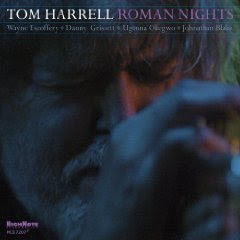 As a proud proponent of the “if it ain’t broke, why fix it” philosophy to music-making, trumpeter Tom Harrell reconvenes his working band for this latest release. It’s the same quintet on his last several records for High Note and a compelling example of the sort of dividends divisible from longevity with such an aggregation. These players know each other well and that camaraderie breeds a constructive shared confidence.

While both the instrumentation and music could easily construe as conventional, Harrell hardly seems bothered by the potential summation. He’s been in the game for so long and paid more than his share of dues, personal and professional that proving himself at this point in his career isn’t even of peripheral importance. Dig it or don’t, I’m going to do it the way I want to, seems to be his working credo. Fortunately, with the financial and artistic stability afforded by a continuing arrangement with High Note, any dark days seem well relegated to the rearview.

Tenorist Wayne Escoffery, who leads his own groups on the label, recalls a certain elder Wayne in his propulsive phrasing, which spools in close concert with the leader through melodically-charged serpentine coils. Harrell’s long been enamored of hard- and postbop forms that reached their apex in the mid- to late-Sixties and as with the past albums, those harmonic idioms directly inform his compositions and playing. Heroes Hubbard, Dorham and, perhaps most prominently, Baker are audible in his argot but Harrell is still very much his own man. Pianist Danny Grissett officiates the rhythm section on mainly to acoustic keys, but also breaks out the Rhodes on four numbers. Bassist Ugonna Okegwo and drummer Jonathan Blake complete the band and exude enthusiastic energy analogous with the others.

“Storm Approaching” and “Let the Children Play” work off vibrant hardbop structures, following familiar paths but offering winsome music on the passion and purpose of delivery. The title piece speaks to Harrell’s sublime facility with ballad form, his burnished exploration of a Milesean melody bracketed by warm comping from Grissett. Other standouts include the descending line “Agua” and the modal minefield “Bird in Flight”. While this album is certainly of a piece with the passel that’s come prior in Harrell’s recent discography, it’s still a satisfying listen and proof that playing what you know intimately needn’t be an instant recipe for redundancy.
Posted by derek at 8:28 AM