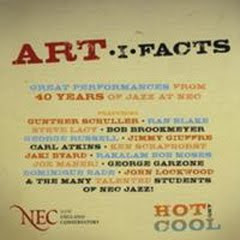 Jazz education remains an embattled institution. From perpetual under-funding to the dogged belief that improvisation is better learned on the bandstand than in the lecture hall, obstacles endure. The New England Conservatory is one of the few academic bastions to weather the prevailing storm relatively unscathed. The school’s sterling reputation rests largely on the quality of its faculty, an eclectic roster that has employed some of the guiding lights in the music over the past 40 years. This recent sampler presents an audio scrapbook of some of the highlights of their work over that span and it makes for an edifying experience, start to finish.

The biggest treasure amongst the fourteen tracks for my biased ears is “Zeibekiko”, a Greek folk song given the royal microtonal treatment by Joe Maneri and small ensemble accompaniment of piano, acoustic guitar and dumbek circa the winter of ‘76. Maneri glides through the joyously keening theme, lathering on tangy vibrato with his licorice stick in an ebullient display of barely-tethered enthusiasm. Hearing him revel in the sort of rustic fare that was a staple of his youth makes me pine immediately for more as well as wonder what other wonders are stored in the NEC library.

Solos by Steve Lacy, Jaki Byard and Ran Blake, each plying idiosyncratic renditions of Monk tunes, tie for a close second. Lacy’s performance poignantly dates from shortly prior to his passing while Byard’s genie-in-a-bottle version of “’Round Midnight” is anything but another Seventies artifact. Blake tackles the same tune nearly three decades later and makes for a fascinating A/B comparison of impressionist versus expressionist approaches. All three performances are commedable examples in how the best jazz is personal.

The NEC Jazz Orchestra does Byard the honor of covering his “Aluminum Baby”, though it’s more a feature for band’s bassist rather than drummer Harvey Mason as stated on the tray card. Fellow faculty members Rakalam Bob Moses and Bob Brookmeyer also receive nods with stirring renditions of “Reverence” and “Cameo”, respectively. Rounding out the large ensembles represented, the school’s Duke Ellington Repertory Orchestra and Ragtime Ensembles each conducted by Gunther Schuller, make book-ending forays through “Cottontail” and “Maple Leaf Rag” and demonstrate viable alternatives to the starched-collar Lincoln Center route.

On the small group side, George Garzone fronts a trio with bassist John Lockwood and drummer Moses, deconstructing Coltrane’s “India” while students tenorist Sam Decker, guitarist Will Graefe and bassist Nate Therrien pay tribute to Jimmy Giuffre in a stirring trio translation of “The Train and the River”. The only track that falls a bit flat through pop jazz proclivities is that of vocalist Dominique Eade, the first student to graduate in the school’s Third Stream program. In sum, this collection does just what a successful sampler should: it effectively maps its subject matter while whetting listener appetites for more.
Posted by derek at 6:23 AM