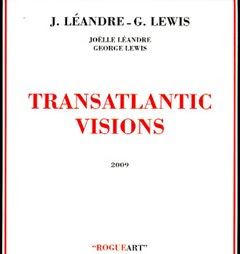 A conversation between double bass and trombone might seem like a dubious combination at first glance, but in the hands of Joëlle Léandre and George Lewis the instruments are anything but oil and water. Their meeting was one of the most inspired ideas of the 2009 Vision Festival, an annual gathering that has fielded accusations of insularity and programmatic repetition over the years. This set is handy ammunition in shooting down those slights since neither Léandre nor Lewis is a regular member of the improvising community at the festival’s core. The speed with which the recording acquired circulation is another indication of its enduring quality.

Léandre and Lewis engage in five duets and a single solo piece apiece. One of the most striking facets of the performance is the vocal elements inherent to their improvisations. Lewis filters his voice directly through is instrument, trading in eructative polyphonics and metallic mutterings. There’s a delightfully capricious segment of his solo piece where he even approximates beat boxing. Leandre’s voice usually works above and around the resonating body of her instrument, blending with the striated harmonics set into play by her blurring bow or floating apart in a vernacular of constricted cries and sighs. There’s a segment in the pair’s second piece together where her husky exhalations almost sound like Native American chant.

Another remarkable commonality is the complete control of pitch each player commands in relation to instrument. Léandre’s long been one of the most accomplished arco improvisers in existence and her bow work in this context is predictably stunning. Her purely plucked patterns are comparatively fewer in number, but no less varied in their timbral breadth, reaching from skittering high fingerboard patter to deep rumbling thunder. Lewis’ embouchure is impressively malleable in its pursed precision; he blows whinnying chortles and gossamer gusts with equivalent surety. At eight minutes short of an hour, the dialogue feels just the right length, giving room for the players to expound without wearing their animated conference into the ground.
Posted by derek at 5:56 AM