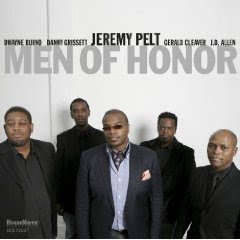 A near-perfect contender for Blind Fold Test bait, trumpeter Jeremy Pelt’s latest disc is at cursory listen but a half-step removed from the sort of music Shorter and Hancock recorded for Blue Note circa 1963. Bassist Dwayne Burno’s “Backroad” could almost be mistaken as a lost outtake from Night Dreamer. Saxophonist J.D. Allen’s “Brooklyn Bound” sounds like a close cousin to the modal-minded fare on Maiden Voyage. The clincher on the comparisons comes with the realization that Rudy Van Gelder’s fingers are at the studio controls.

Those cosmetic similarities immediately position the band for potential evisceration by those still brandishing knives for the Marsalis brand of jazz classicism, now thankfully on the wane. Initial exposure may even make less biased listeners do a double take in wondering just what exactly Pelt and his partners think they’re bringing to the table in the way of the new. The thing is, new isn’t the name of this particular game.

Once the sense of déjà vu settles in, the music does an exemplary job of dismissing its importance. Pelt and his crew are consummate players, obviously versed in the work of their jazz elders, but also open to influences outside the idiom. Burno joins pianist Danny Grissett and drummer Gerald Cleaver in building a rhythm section of uncommon parity. Pelt and Allen are similarly synchronous as the frontline, harmonizing, sparring and soloing with speed, grace and equal aplomb.

The tunes exude a hardbop pedigree, but the sheer joy and professionalism that the band communicates when playing them quickly becomes the reward in and of itself. Pelt apportions the music in just the right amount so as not to feel staid or overwrought. Several of the pieces challenge the musicians from a technical standpoint with numerous sharp twists and turns, particularly on the heads, but they sustain an overarching mellifluousness and effervescence that counterbalances any semblances of showing off.

Jazz is rife with repertory-influenced projects that mine the past for present-day pleasures. What separates the ore from the pyrite is precisely what Pelt focuses on, playing with personalized verve and precision in a manner that transcends associations while remaining cognizant of their prominence. It’s a philosophy directly reflected in the disc’s title. The Blue Note classics aren’t in any peril of being replaced and most remain readily available. Considering that reality, who outside the curmudgeonly and picayunish would argue against the peaceful coexistence of faithfully constructed progeny?
Posted by derek at 5:37 AM