McPhee/ Brötzmann/ Kessler/ Zerang – The Damage Is Done (Not Two) 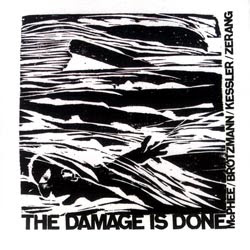 A lesser-noted boon of the Brötzmann Tentet is the several smaller groupings born out of the larger long-standing aggregation. Joe McPhee’s Survival Unit III with Fred Lonberg-Holm and Michael Zerang is one such collective. This pairing of the Poughkeepsie Powerhouse and the Wuppertalian Warhorse with a pared down version of the Tentet engine room is another. The group’s two previous recordings on hatOLOGY and Okka Disk were studio and concert affairs, respectively. This one captures them again in concert at Krakow’s Alchemia, March of 2008, in a program that sprawls and caterwauls noisily across two discs. It’s a notable conclave for several reasons; foremost for the focus it accords Brötzmann’s alto and McPhee’s trumpet, though other instruments in each man’s arsenal also come into productive play.

Running contrary to McPhee’s lead listing in the line-up, Brötzmann dominates much of the set and is even more obstreperous than usual. On the 30-minute title piece it sounds as if a swarm of bees has nested in his facial hair, his shrieks and howls on alto spraying the audience with some of his most unhinged playing of recent memory. McPhee trails close at his flank on trumpet, adding crenellated textures from a slightly recessed position. The stack-blowing German hardly seems to notice and the two arrive at fleeting snatches of harmony almost by accident as Kessler and Zerang churn and boil beneath them.

Practically chomping at the bit, Brötzmann muscles in on his colleagues’ subsequent solo passages with no compunction. They wisely capitulate and despite a few asides into comparative contemplation, it’s a bruising nosebleed of a piece for much of its duration. Two thirds in, opposing altos exchange salvos over a roiling rhythm until Brötzmann abruptly goes silent, leaving McPhee to dig deep into his spiritual bag sans accompaniment. It’s a startling reversal in tack, especially in light of the reed savagery meted out earlier, and evidence that even after a half century in the free jazz frontlines, the German still has the ability to pull the rug out on listener expectations.

“Alchemia Souls” initially pairs Brötzmann’s recalcitrant tarogato with McPhee’s trumpet and opens up valuable space for the rhythm section. The German eventually turns to fulminating tenor and McPhee joins him on same for a jousting close. “A Temporary Trip” starts the second disc as the frontline hoisting clarinets and twining on a vaguely North African kernel of melody. “With Charon” pulls liberally from the Ayler Brothers playbook, alto and trumpet blasting through a martial folk rondo as the partners converge on a lurching akimbo groove. The finale, “Into the Hades” is oddly subdued compared to much that transpires prior, the two reedmen rejoining on tenors through a sorrow-laden threnody. Kessler and Zerang are troopers throughout, meeting the onslaught head-on, but also adapting beautifully to the periodic interludes of brooding quiescence. Even with the aforementioned skew, this band is at heart an association of equals.
Posted by derek at 11:51 AM