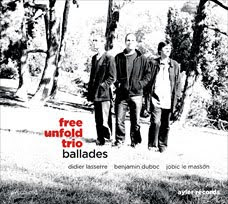 Three Frenchmen undertake that most familiar of jazz vehicles, the piano trio, but being on Ayler, their findings forego the ordinary in an attempt at something else. EP-sized in length and loosely broken into halves like a vinyl record, the program’s four pieces, though discretely indexed, unfold more like a medley with differences clouded instead of clearly delineated. Theirs is an incremental music, largely free of any kind of countable tempo and gradual in its progress. The pieces approximate ballads more in feel and temperament than actual form or content with themes sketched and stippled rather than expounded in passionately drawn strokes.

Texture factors heavily in the communication, with each man working willingly under self-imposed restraints. Jobic Le Masson fingers his keys in muted stops and starts, sifting over fragments of melody with a gestural deliberateness. Drummer Didier Lasserre scrapes his cymbals and worries his snare with brittle brushwork, his bridled sound here starkly constrastive with the combative persona he adopts on Snus, another recent Alyer release. Bassist Benjamin Duboc tugs hanging tones from his strings that float between wide intervals. The effect is like Bill Evans if refracted through the minimalism of Morton Feldman with space and silence holding as much import as the actual staggered and stunted notes sounded.

The album’s brevity actually works in its favor. Any longer and the restrictive nature of the trio’s agenda would likely begin to wear and abrade. Undertaken on its own terms, the music is an interesting experiment in pinioned improvisation, but in terms of enticing repeat exposure it’s slightly less than successful. One Aymeric Leroy pens an ode of admiration in his liners to the release likening them to soldiers in the shadows. These particular ears don’t completely share the sentiment, wishing for a bit more from what is in the end a rather thin musical gruel.
Posted by derek at 6:30 AM