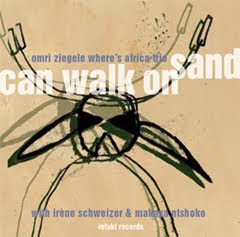 Altoist Omri Ziegele’s Where’s Africa project could easily be renamed “Here’s Africa” what with the inspired addition of drummer Makaya Ntshoko to its ranks. Ntshoko was a member of the celebrated cadre of South African expatriates that included players like Louis Moholo, Dudu Pukwana and Johnny Dyani. Breaking ranks with his countrymen, he ended up settling in Stockholm and became house drummer at the Café Montmarte for a time in the late-60s. In the years since, he’s gigged around Europe, most recently releasing an excellent set by his working band The New Tsotsis on Steeplechase last year. Swiss pianist Irene Schweizer, herself no stranger to the variegated musical traditions of the Europe and Africa, completes the core trio and comes across with some of her most melody-minded playing of recent memory.

The name of the game for this intensely enjoyable outing is ebullience and effervescence. Ziegele selects an eclectic songbook to accompany three of his originals that spans Oliver Nelson to Chris McGregor to Dollar Brand. Most, like the 39-second sprint through Ornette’s “Giggin’”, are mere morsels, but others like the sumptuous duo rendering of Mal Waldron’s “Soul Eyes” have plenty of meat on the bone. Ziegele sounds little like Lacy, but his treatment of the tune, mirrors the composer’s famous forays with the former Steve Lackritz in structure and temperament. Solos by he and Schweizer bookend an elegant middle passage of close colloquy. Saxophonist Jürg Wickihalder guests on three of the pieces, his piquant soprano and alto especially effective enhancing harmonies on the two slices of Dyani-penned township bop that close the set out.

Fidelity is bright, clean and intimate in its capture and there are moments when Ziegele’s colorful phrasing almost borders on the shrill, so sharp-toned is his sound. Ntshoko is a valuable rhythmic rudder, switching smoothly between mallets and sticks and swinging with a supple balance of power and restraint. Schweizer is similarly suited and sounds as if she’s having a ball negotiating the structures of the songs. The one potential sore-thumb piece is Ziegele’s solo reading of Gershwin’s “Summertime” where he interjects sung-shouted snatches of the song’s initial two verses between oblique variations on the theme. It’s a raw, emotions-on-sleeve performance, partly at odds with the polished beauty that’s come prior, but that’s probably the point. The three wrap up their conclave in well under an hour and that decision for relative brevity works in their favor too, priming the palate for what's hopefully more to come.
Posted by derek at 7:51 AM