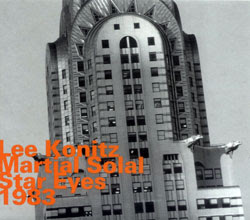 Outside of a solo performance context, memorable jazz improvisation hinges heavily on interpersonal chemistry. Lee Konitz knows this recipe better than most. He’s been a professional improviser for 60+ years and participated in recording sessions numbering well into the triple digits. Sometimes you hit, sometimes you don’t. Who have with you plays a large part in the outcome.

I had the misfortune of catching him several years ago on an off night in the company of a lackadaisical Twin Cities rhythm section that couldn’t light an improvisational fire to save their skins. They gamely ventured through a book of standards, but Konitz clearly outclassed them from the onset. He could hardly mask displeasure through a series of truncated solos and a frustratingly succinct set time. This German concert with French pianist Martial Solal, now in its third iteration on the Hat label, represents the opposite end of the quality spectrum. It’s one of the highpoints of each man’s discography and a disc I routinely seek out when in need of a platter to initiate a skeptical jazz novice to the pleasures of superlative improvisation.

The exact count on how many times Konitz and Solal have recorded together is difficult to quantify, but their performances, dating back to the late-60s, are likely several times as many. At the time of this 1983 meeting the well of shared experience ran deep and it shows from the opening rendering of “Just Friends” onward. Konitz had played these standards so many times they were practically in his blood. Even the solo original “April” springboards from familiar chord terrain. Solal’s given name is such a playful misnomer when juxtaposed against his ebullient and inviting piano style, particularly on his own “Fluctuat Nec Mergitur”, which he realizes sans his partner. Residing benevolently over eighty-eight keys he creates orchestral-rich accompaniment for Konitz’s melodic musings that never fails in its innate musicality.

Both players actualize their ideas with the dexterity and accuracy of surgeons, cutting through the familiar connotations of the tunes and getting at fresh harmonic viscera beneath. Even with the supreme skill on near-continuous display, there’s nothing sterile or academic about their clever variations and interpolations. “Body & Soul” embodies a chestnut cracked countless times, but Konitz somehow finds something new under the wizened shell through his unraveling of the theme. Solal practices similar resuscitative powers on a 10-minute safari through “What’s New”. The awestruck condition referenced in the disc’s title is a natural payoff of each and every audience with this superb set.
Posted by derek at 4:27 AM