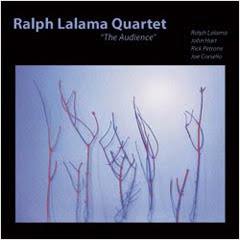 How many times has a tenor saxophonist fronted a rhythm section comprised of guitar, bass and drums? When does a particular instrumentation cease yielding interesting results? These are sticky questions unintentionally brought to the fore by this latest outing by veteran saxophonist Ralph Lalama’s quartet. Like their employer, guitarist John Hart, bassist Rick Petrone and drummer Joe Corsello are all solid players. The all complement one another with keen sensitivity and concentrated creativity. Each brings his respective A-game to the session and spurs Lalama to some splendid tenor work that’s at once relaxed and incisive in its dry-toned distillation of past masters. Enthusiastic liner notes by Joe Lovano also help measurably in proving the band’s bonafides.

Still, there’s the persistent realization of a scene that has countless counterparts in the vast annals of jazz. Lalama hardly seems hindered or bothered by that history. He comes to blow and blow he does on a ten song program that touches on hardbop, balladry and even Motown soul. Interspersed between these pieces are opportunities for the leader to dialogue in improvisation with each of his partners. “Jome” and “Ricme”, the pieces with Petrone and Corsello respectively, are particularly effective in this regard, loosening up the participants and sliding over into a loose, quasi-free dialogue.

Hart enjoys equal footing in the solo department, a standing intimated early in the way Lalama defers to him on Wayne Shorter’s “Marie Antoinette”. It’s a rendering that curiously brings to mind Bill Lee’s arrangement in his son Spike’s She’s Gotta Have It, though the melody is explicit in only the opening and closing sections. Hart’s thickly amplified chording on Stevie Wonder’s “Livin’ For the City” almost sounds like a Hammond B-3, but he dials it back to an almost acoustic delicacy for the disc’s centerpiece “Portrait of Jennie”, a tune that also allows for a gorgeous unaccompanied cadenza by Lalama. The saxophonist nods to Rollins in the finale reading of “I’m an Old Cowhand”, but his version has rounder edges and a more overtly soulful burnish. Quartets of this type may be quantifiably numberless, but Lalama and his colleagues point convincingly to that truth as moot when it comes to possibility of quality music.
Posted by derek at 8:34 AM