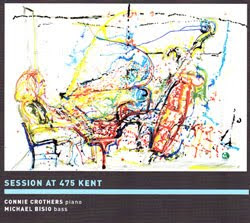 Considered something of a Tristanoite in her early years, pianist Connie Crothers has long since supplanted the mantle of her mentor for a style all her own. This challenging and worthwhile session, recorded at her loft space in the company of bassist Michael Bisio, summarizes just how far she’s come from those formative stages. Bisio might not seem like an apposite partner at first blush, but his full contact, “kitchen sink” approach to his instrument is exactly the sort of creative foil Crothers thrives on (cf. her ’82 duets with Max Roach).

The duo engages on four lengthy slabs of improvised music, the shortest two clocking in at over a dozen minutes apiece and the final consuming third of an hour and what has to be a kilo of horsehair burned up in Bisio’s bow. Each spools out like a stream-of-shared-consciousness conversation and even when the pair peels off in separate directions for stretches, an underlying anatomy of continuity perseveres. Artist Jeff Schlanger’s cover painting (a welcome return of his Music Witness work to a circulation forum it’s well-suited too) gives a handy visual analogue to the combination dynamism and prismatic color on display.

There’s always been density and loquacity to Crothers playing and both traits are in full bloom in these intimate, highly resonant surroundings. Her pedal-swollen patterns on “Improvisation #7”, the disc’s third piece, fill up her corner performance space as Bisio builds a complex ostinato via furiously perambulating fingers. A sawing drone he sets up on the second excursion, “Improvisation #5”, complements Crothers alternately pellucid and opaque clusters and stabbing accents. The brooding clouds break halfway through with Bisio turning to stampeding, reverberating pizzicato and Crothers crafting lyrical right hand motifs amidst rumbling left hand anchors, losing nothing in the way of temerity in the bargain. By the track’s ominous end it’s hard not to imagine Bisio’s digits bleeding profusely and Crothers at risk for repetitive stress injuries.

The two move together at speeds and moods varying from blur to crawl, but allow no dust to settle in the cracks of their communication, each quickly adjusting to the other, but refusing to become bogged down in diverting niceties or affectation. Every shift in their dialogue is audible and mappable, but it soon becomes preferable to simply allow the music’s immersive effect to take hold. With close-knit and demanding interplay of this caliber the mind naturally wonders about the unaccounted for improvisations that fall between the numbers ascribed to those issued. With luck they’re of comparable quality and will see release sometime soon.
Posted by derek at 4:16 AM