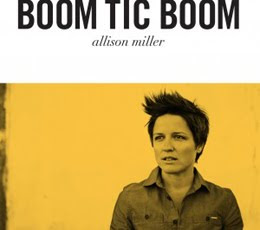 Background beyond the basics on Allison Miller is absent in the packaging of this disc. That’s hardly a problem, however, as her music swiftly conveys volumes about whom she is and how she approaches her instrument. Most apparent is the way her playing warmly invites listeners to ruminate at length about the drums, about their role in a jazz ensemble and what they’re capable of both within that framework and without. She’s the ostensible leader of the session, but in the estimable company of pianist Myra Melford and bassist Todd Sickafoose she shrugs off any privileges presumptive of the position, opting instead for equilibrium of input with her partners.

An exquisite crispness and clarity attends Miller’s constructions, along with a speed between thought and action measurable in milliseconds. Her sticks move with machine-like precision, but retain a very human grace. She never overwhelms from her kit, though the resiliency and immediacy of her rhythms implies that she readily could if so inclined. There’s abundant humor as well as she slips for bold relief swing to a slippery funk beat and on to an oddly-metered aside in a manner that exposes more than a passing interest in rock. Taking stock in this sampling of her artistry I can’t help but think of the often-shoehorned but still valid adage of teenage Peter Parker’s Uncle Ben, “with great power comes great responsibility” put into practice.

Half of the program’s eight tunes are Miller originals. The trio also runs down two by Melford along with Mary Lou Williams’ “Intermission” and Hoagy Carmichael’s “Rockin’ Chair”. Melford melodic side is in full bloom on the latter, almost to a fault. Miller’s cymbal washes and brushed snare accents help in neutralizing any schmaltz. Each piece packs in liberal amounts of improvisation while frequently remaining thematically grounded. Proof of Miller’s willingness to defer is plain with the middle section of Melford’s “Be Melting Snow” where the drummer sheathes sticks and serves as spectator for the composer’s close conversation with Sickafoose. For his part, the bassist wields a broad resonant tone from his strings, perfectly matching the agility and alacrity of his colleagues. Violinist Jenny Scheinman sits in on “CFS” adding texture and enhancing the folk-friendly interplay of the piece. Miller's facility and versatility definitely make her one to keep close tabs on and this set is an ideal introduction.
Posted by derek at 11:33 AM