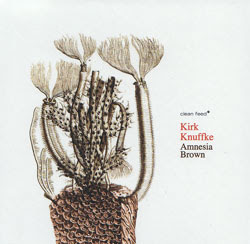 Most familial histories include at least one black sheep forbearer, a member who marched to the beat of his own drum at the expense of his or her loved ones. Trumpeter Kirk Knuffke pays wry tribute to one such outcast of his clan on this latest Clean Feed release. The eponymous individual was a great grandfather who abandoned his family and started a new one in a neighboring town. Upon discovery, he cited the affliction as his reason for leaving and the nickname stuck. The story passed into hereditary lore and became a handy thematic source point for a trio project Knuffke had been trying to organize with fellow New York-based improvisers Doug Wieselman and Kenny Wollesen.

Their instrumentation distantly recalls Shelly Manne’s “The Three” with Shorty Rogers and Jimmy Giuffre, though clarinetist Doug Wieselman doubles on electric guitar rather than playing multiple reeds as Giuffre did and the resulting music is quite a different bag. Knuffke foregoes mutes, manipulating a highly malleable tonal palette with embouchure and valve effects instead. Wollesen is the rhythmic fulcrum, applying tenacious metered glue in daubs or full-fledged strokes depending upon the composition, all of which come from Knuffke’s quill. All three men are members of Butch Morris’ Nublu Orchestra and that large scale mindset to movement and color informs their small group interplay.

The sixteen compact pieces never stray over five minutes and most clock significantly shorter. They neatly divide along which axe Wieselman wields. Many of the clarinet pieces pivot on fluid counterpoint and communicate chamber associations as a result. The guitar tracks are often more rock-inflected in cast with Wieselman lathering on jangly reverb and carving out fanged arpeggios as he does on “Double”, “2nd” and “Hears It”. “Totem” sounds a bit like concentrated fusion-era Miles distilled of all distracting detours as quietly echoing plectral notes harden and intensify and a porous beat gradually consolidates into an incrementalized groove.

Knuffke remains his cool-toned, unruffled self in either context and his rounded, textured phrasing comes across like a cousin to other players like Tom Harrell and John McNeil. On clarinet pieces like the madrigal-minded “Practical Sampling” and the wobbly waltz-time “High-pants Bob” knotty heads allow for closely twining debate. Wieselman veers from heavy vibrato trills to birdsong chirrups and the variety again creates colorful contrast with Knuffke’s gliding lines. The lovely tone poem “Anne”, unfolding as an airy processional of simple construction, serves as an optimal closer. Amnesia really isn’t an option in the wake of these exciting sounds.
Posted by derek at 6:47 AM