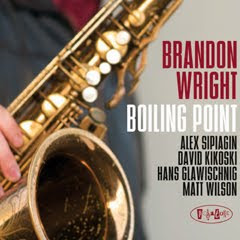 Over four decades after his premature passing, Coltrane is still a near-inescapable force for jazz saxophonists who opt for tradition-minded playing. Twenty-something Brandon Wright certainly sounds under the master’s spell. From the bright, soaring unisions of “Free Man” the opening number on his new release, the tracks of Trane are a primary method of melodic travel. That observation may read like a slight, but it’s not indended as one. After all, if a player is going to cop a sound to build on, it might as well be that of the heavyweight champion.

Subsequent pieces in the program betray other indelible influences. “Drift” sounds shorn from a cloth similar to that of Wayne Shorter’s Sixties tune-smithing in the warm enveloping harmonies and dusky overriding melody. “Here’s That Rainy Day” has etchings of Ammons in the robust rounded tone Wright rings from his horn’s reed. A capable band of conscripts aid him in his cause starting with his canny frontline partner,Alex Sipiagin. Morgan and Hubbard weigh heavily as ringers in the trumpeter’s lithe phraseology and there are moments in his animated interplay with Wright that intimate stimulating frontline partnerships so common to the classic Blue Note-ear. Pianist David Kikoski, bassist Hans Glawischinig and drummer Matt Wilson also make fine company for the leader.

Tune-wise no true surprises present themselves in what is galvanizing, but ultimately somewhat generic hardbop fare. Wright was the 2009 ASCAP Young Composer award winner so the manner in which he limns close to convention in most of the contexts here is slightly disappointing. Five originals balance against a pair of jazz standards and the left field choice of the Stone Temple Pilots “Interstate Love Song”, reconfigured here as a ballad with muscle. All pieces prove able-bodied blowing vehicles and Wright and his crew tackle them wih equal aplomb. There’s a pleasing consitency between compositions and a solid album coherence to the set.
Posted by derek at 7:21 AM