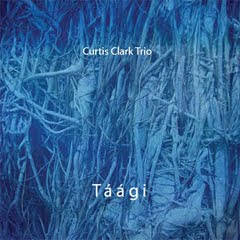 As was the lot of his mentor Horace Tapscott, pianist Curtis Clark’s career continues to unfold largely outside the jazz celebrity limelight. That disparity in popularity relative to talent and activity hasn’t slowed him down over the years. Clark’s reliably sought out unconventional collaborators both domestic and abroad and managed to build a modest discography through the effort. An audience of those in the know exists for his work and it’s one that grows as the word continues to spread.

Aaron and Stefan Gonzalez assert a similar attitude toward self-promotion and the vagaries of prestige. With minds focused on music-making they would rather allow their work to speak for itself. Each has diverse roots branching from punk, metal and mariachi as well as jazz and brings a youthful brio to every musical setting they find themselves in. In common with their father, noted composer/improviser Dennis Gonzalez, they aren’t reticent about accepting invitations from every corner of the global improvised music community. That open door policy obviously includes those players, like Clark, who upon first consideration might not seem the most obvious candidate for an alliance.

Recorded at a pair of intimate recitals in Dallas and Austin in the spring of last year, this disc shows right from the onset that skeptical assumptions about compatibility of the three players are doomed to aural repudiation. The Gonzalez brothers leave Clark to his solo musings in the opening segments of the suite-structured first two pieces. The pianist uses that alone time to wax eloquently through a series of impressionistic extrapolations on malleable blues and gospel figures. The results curiously echo what an improvised variant of the music of 19th century composer Louis Moreau Gottschalk might sound like in its mix of romantic and rootsy architectures.

The entrance of bass and drums on both pieces signals an increase in momentum and color. Aaron’s strings exude bulbous weight through the aid of amplification, but his prancing lines remain lithe and lively. Stefan’s sticks and brushes shed responsive rhythms with a speed and consistency that never feels rushed or crowding. The close attention each player pays to texture provides Clark a porous sounding board for a succession of dynamic right hand leads. The album’s distinctive title derives from the Apache word for three. The term summarizes exquisitely the artistic agreement at the essence of their collaboration. Limited to a pressing of a thousand copies, this set isn’t one to sleep on.
Posted by derek at 4:29 AM