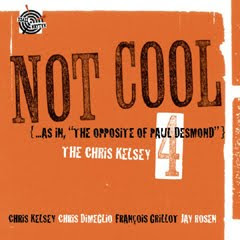 As playfully glib as ever, saxophonist Chris Kelsey couches his latest effort in an oppositional framework certain to arch a few eyebrows and maybe even roll a few eyes. His commentary to the disc commences with a caveat clarifying that his decision to sight Paul Desmond in his crosshairs isn’t strictly motivated by disdain. Sure, he still attaches signifiers like “sappy”, “wimpy” and “nerdy” to the much-lauded surname, but he’s also careful to concede the Caucasian altoist’s stature as “an accomplished and distinctive improviser”.

That’s where the compliments cease as virtually nothing on the album aligns with Desmond’s genteel sensibilities or singularly aerated style of improvisation. From start to finish, Kelsey and his colleagues favor fire-spitting free jazz fare of the sort that’s been idiomatic for nearly half a century. The saxophonist takes obvious pleasure in wrinkling and warping his delivery with liberal doses of raspy vibrato. One of his earlier sessions for CIMP carried the title The Crookedest Straight Line and that diametric phrase holds true here too, his dense patterns canting and slicing at sharp diagonals against the controlled rhythmic tumult generated by his regular confreres, bassist Francois Grillot and drummer Jay Rosen.

The date is also notable for a number of other reasons. First, there’s the presence of trumpeter Chris DiMeglio who boldly matches Kelsey in the frontline, doling out tonal unpredictability with a colorful array of brassy slurs and smears. Second, Kelsey’s addition of tenor and alto to his usual soprano playbook opens up fresh avenues of expression. His phrasing on the straight horn is curiously the cleanest of the three, the other two suggesting spiral staircases of oddly stacked phrases. The pieces follow similar schematics of knotty ensemble statements followed by bristling solos. Kelsey leaves little time for coasting and his puckish propensity is also present in the clever titles he hangs on the compositions (cf. “If Jazz is Dead (Can I Have Its Stuff?)). In a lone overt concession to the canon, the set signs off with a comparatively mellow stroll through Ayler’s “Ghosts” and the closest thing to Desmondian decorum on the date.

Kelsey is a provocateur in the best sense of the term: a player (and writer) who thrives on pushing buttons, but does so with both intelligence and an underlying respect for both the audience and art form he chooses to work within. It’s a thin tightrope to traverse sometimes and invites the occasional tumble, but Kelsey’s hardly one to wince at any resulting bruises. As enjoyable as this session is as a Desmond-antipode, I’m still half-inclined to airmail him a copy of Quartet and see if I can’t inveigle a revision in his opinion.
Posted by derek at 5:35 AM