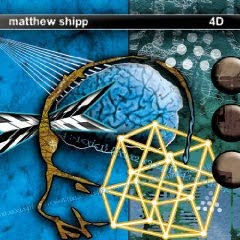 Slings and arrows are something of a Matthew Shipp specialty. Whether he’s artfully lobbing them at others or absorbing the brunt of them himself, he’s never been one to shrink from candid expression or the lumps that often come with it. That kind of confidence also his informs his language on the piano. Stasis is his mortal enemy and his past work is marked by a continual yen to search out new ground while retaining fealty to foundations of his sound. Fortunately, he found receptive outlet for that restless creative impulse relatively early in his career through a reciprocal relationship with the Thirsty Ear imprint. This new solo disc celebrates Shipp’s tenth recording as a leader for the label and in a way it’s a fitting full-circle statement capstone on his career to date.

Shipp essays solely to acoustic keys for the program’s sixteen pieces. All of that aforementioned extra-musical baggage has a welcome habit of falling away when he sits down at the piano bench. He frontloads the intimate set with originals and a handful of standards and public domain pieces dominate the second half. Shipp’s leavened the lurching density so prominent in his early work with a heightened emphasis on lyricism. An ardent proponent of pedal play, he can still summon the thunder when the mood moves him, but there’s a variety to these pieces that speaks a general expansion in tone. The opening title piece is an early example of the dynamic as he works the pedals to usher a lush through theme filters of darkness and light. “Teleportation” starts in a stuttering, eliding form that obliquely recalls Monk, but whereas the elder’s emphasis was always economy, Shipp packs his clusters close to the brim.

The pieces play as discrete entities but also have a pleasing congruity about them. “Stairs” balances weight and space, sometimes within the span of a single phrase. It segues almost imperceptibly into “Jazz Paradox”, another piece ripe with roiling changes in speed and direction. Shipp devours the standards on his docket with little regard for traditional decorum. “What is This Thing Called Love” is recognizable in its initial moments before obfuscating storm clouds swiftly converge in a spate of more pedal-dampened rumbling. “Autumn Leaves” and “Frere Jacques” are old friends of Shipp’s oeuvre and he accords them little in the way of niceties, exaggerating the underscoring drama of the first with punctuating left hand stabs while the latter bobs by buoyantly under the aegis of eddying pedal swells.

Those individuals who’ve felt the sting of Shipp’s blunt opining might very well be waiting in the wings to diminish this set with their gestating ire. Shipp’s almost certainly ready for them with retorts of his own, but the strongest response still rests in the sounds themselves.
Posted by derek at 12:19 PM