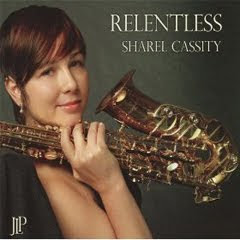 Despite the global proliferation of jazz, New York City remains the foremost proving ground for the music’s practitioners. Making it in the Apple still ostensibly means making it on the world stage. Classically trained, with diplomas from both the New School and Julliard, saxophonist Sharel Cassity’s credentials are not uncommon to the caliber of player competing for gigs. Cassity’s made the most of her residency by networking with a wide swathe of her peers. She convenes a cadre of their number on this leader date, running down a program dominated by her own compositions. Trombonist Michael Dease contributes a piece and the disc wraps with an arrangement of Charles Tolliver’s “On the Nile” that mirrors the instrumentation of its original Blue Note recording by Jackie McLean and the composer.

Wielding alto, soprano and flute, Cassity commands a warmly creative mien to each. Besides Cassity, the constant across pieces is the rhythm section headed by pianist Orrin Evans and completed by bassist Dwayne Burno and drummer E.J. Strickland. Dease is present on all but three tracks. Trumpeter Jeremy Pelt accompanies Cassity for three tunes including with the smoking hardbop numbers “Call to Order” and “No Turning Back”. Flugelhornist Thomas Barber and tenorist Andres Boyarsky join Pelt on the shifting-meter obstacle course “Song of Those Who Seek” as well as two other tunes in his absence. Capping off the guest list, saxophonist Don Braden fields alto flute and enhances tonal color on the Cassity original “Still”.

The round robin approach to personnel enhances the session variety while keeping Cassity on her improvisational toes. As effervescent and focused as the playing often is, there’s still something slightly quotidian about the date. The tunes are durable in construction, but there’s little in the way of memorable surprises in either their renderings or the solos they foster. Cassity’s career likely has many more years ahead so the need for a homerun isn’t urgent. Her priority for placing creative integrity ahead of probable financial gain also speaks to potential longevity. Listeners with a yen for tradition-savvy sounds will find much to their liking here though others may wish for more in the way of singularity.
Posted by derek at 5:59 AM