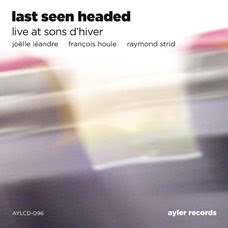 A concert counterpart to their split live/studio disc on Potlach from 2006, this Radio France-recorded document finds this trio of masters in fine fettle in front of French audience at the dawn of 2009. Bassist Joëlle Léandre has a personal command of her instrument rivaled by but a few and her arco artistry earns the admittedly over-applied signifier of virtuoso moreso than most. Taking Evan Parker as part of his blueprint, Canadian clarinetist François Houle has honed a circular breathing technique on the licorice stick that makes impeccable use of its liquid pitch properties. Swedish autodidact drummer Raymond Strid is at once the glue and corrosive behind his kit, tying the music together and tugging it apart at intentionally erratic intervals. Knee-jerk hyperbole aside, it truly is a satisfying meeting and one that presents the trio at the peak of their collectively improvisatory prowess.

The disc breaks down into seven distinct sections to better aid listener ingress. The first section finds Houle hoisting two clarinets and creating spiraling doppelganger braids as Léandre and Strid supply shifting dynamics on mercurial bow and a scuttling array of percussion. The timbral parity between reed and strings is often startling, the conspiring strains answered by a tidal cymbal wash from Strid’s corner in the closing minute. Houle’s hollow tone and fluttering temerity on the second part sounds decidedly flute-like, Léandre laying down a thrumming commentary pocked by clipping percussion high on the instrument’s bridge. Strid soon picks up the pattern with a skeletal stick-on-rim patter that expands to encompass peripheral percussive devices about his kit. Houle sounds off on sibling reeds before falling back into a clattery, heavily textured colloquy for bass and percussion.

Léandre leaves Houle and Strid to an intense dialogue on the third part, one that recalls the sort of aggressive chamber cascades Evan Parker and Paul Lytton used to specialize in. The set continues along an unpredictable, instant-composed itinerary that invites subjective description. Strains of Giuffre surface in Houle’s sirocco-dry phraseology during the second half of the fourth section with Léandre and Strid lighting little fires around him on bulbous bass and lightly pattering cymbals. The drummer has the initial stretch of the next section to himself, engaging in a controlled junk pile avalanche before Léandre’s oscillating bass commentary arrives in tandem with her highly animated brand of Francophonic vocalese and sonorous ululation. And so the performance progresses, the players pressing forward to repeated audience applause during the breaks. Along the way they give both listeners and each other reason for continual celebration at the uncommonly fine framework for freely improvised expression they’ve formed.
Posted by derek at 4:47 AM