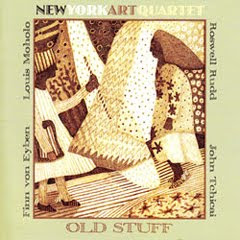 The title of this timely compilation is a true statement at face: Nearly half a century has passed since the sounds were ensconced on tape. Even so, sitting down with the disc yields the pleasing realization there’s next to nothing in the way of dust draping the music. The New York Art Quartet was at once of and ahead of their time. They directly put to pasture the notion popular in some circles that New Thing players placed instrumental prowess as of peripheral importance. Each of the cuts in this collection proves emphatically that these four could indeed play both independently and as a unit, at levels easily on par with peers operating in more conventional settings.

The particular iteration of the band documented here had a short lifespan compared to the stateside line-ups, but it burns brightly just the same. In late 1965, Saxophonist John Tchicai returned home to Denmark to drum up dates for the band. Only co-leader Roswell Rudd was able to make the jaunt across the Atlantic. Dane Finn von Eyben and South African expatriate Louis Moholo fortuitously fell into the pair’s orbit and joined for a handful of gigs. Portions of two shows appear here with the foursome running down a set lists dominated by compositions from the horn players. A loose version of Monk’s “Pannonica” from a Café Montmarte gig is the sole explicit nod to outside influences.

Recorded ten days apart, the two sets feature the band running through a generous selection of compositions pulled from the songbooks of the two horn players. Other than the opening minute of a quarter hour rendering of “Rosmosis” where the horns are off mike, the fidelity of music is mostly balanced and surprisingly clean. The later Copenhagen Concert Hall gig has a slight edge in sound, mainly due to the miking of Moholo’s kit on the Montmarte one, which sounds a brittle by comparison and accentuates the harshness of his already stentorian snare strokes. The drummer, who reportedly had his baptism to free playing within this context, sounds audibly more comfortable with the demands of the band’s style on the second date.

Rudd’s rambunctious antics are in full force out of the (tail)gate, with slurs, smears and mournful metallic whinnies regularly spilling in spouts from the bell of his bone. Tchicai isn’t quite so consistently on target in his alto improvisations, but the occasional faltering actually add to the verite feel of the sets. Von Eben often sounds akin to a free-enamored Niels-Henning Ørsted Pedersen, his fingers scuttling up and down his strings in febrile patterns. Melody guides much of the action, particularly title track present in two delightfully shaggy versions, which sounds like Ornette by way of Cherry. Listeners familiar with the NYAQ will need no hard sell as prompting to pick this set up. That the music is as satisfying both sonically and artistically only underlines its cachet as an essential acquisition.
Posted by derek at 4:36 AM