Tommy Babin's Benzene - Your Body is Your Prison (Drip Audio) 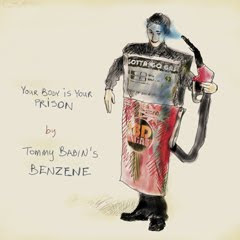 While sharing a name with a highly flammable industrial hydrocarbon, Canadian bassist Tommy Babin’s Benzene has an explosive bent its own. There’s plenty to dig about the project from the freebop-meets-spacerock pedigree of the sounds to the curious non-sequitur illustrations that adorn its packaging. Babin and his colleagues, baritone saxophonist Chad Makela, guitarist Chad MacQuarrie and drummer Skye Brooks, build a continuous suite of compositions in front of a Burnaby, British Columbia crowd.

Divided into nine tracks but usually segueing lubriciously from one to the next, the music takes off in a number of intriguing directions. On the opening piece and elsewhere Makela’s big horn sounds a bit the odd man out despite its weight and reach. Several of the compositions rely on comparatively conventional vamp-like structures that recall early Vandermark groups with Makela riffing against the crunching chording of MacQuarrie while Babin and Brooks ply shifting beats. The more engrossing moments overall grow out of the interplay independent of these pinions, as on the atmospheric opening minutes of the title piece. The coalescing of a groove and Makela’s blustery riffing in unison with MacQuarrie’s fast picking almost feels like an affront to the measured textures that have come prior. The saxophonist experiences an easy redemption in boisterous concert with Brooks on the tumbling freebop somersault that is “Citizen Kang” and the melancholy ballad “Les Trous du Ciel” in gentle dialogue with a luminously-toned MacQuarrie.

Babin is a marvelously athletic bassist and a natural in the leader’s mantle. He pummels his instrument with ferocity and precision that brings to mind the audacity and resonant clarity of Adam Lane. He also has a way of laying in the cut before dropping in a sudden solo that emboldens the tack of a piece without undercutting the contributions of his colleagues. These statements, as at the onset of “Damaged”, are models of melodic and rhythmic perspicuity. MacQuarrie’s fret-borne fireworks cut both ways. The Hendrixian flameout that initiates “The Thing and I” embodies the positive while the languid near-noodling later in the piece feels lax by comparison. Brooks gives a lesson in suspended brushed beats on “Pretty Boy Floyd” prior to the entrance of Babin and the others giving another bulbous vamp the business. Again the Vandemark corollaries ring loud. All four men are new names to me and I’m looking forward to investigating their work in additional contexts.
Posted by derek at 4:34 AM