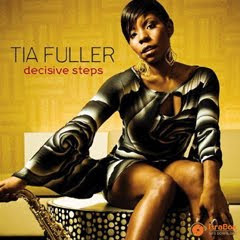 Being Beyonce’s touring saxophonist may bring in bushels of bread, but it doesn’t exactly help with earning jazzhead street cred. Tia Fuller confronts the double-edged sword of her lucrative side gig on this follow-up solo album for Mack Avenue in much the manner she did on her first. Naysayers need not bother, there’s no sophomore slump to knock here. If anything the set is an even more cohesive product than its predecessor. Fuller’s working band consists of fellow sisters drummer Kim Thompson, bassist Miriam Sullivan and actual sibling Shamie Royston handling keys. The leader fields mostly alto, but turns to soprano and flute when the moods strike her. She also handles the majority of composing, with six out of the ten lively tracks springing from her pen.

The album starts strong with the a one-two postbop punch of the title piece and Royston’s “Windsoar”, both built on elastic tempos and galvanizing ensemble exchanges that spark energetic solos from Fuller. Thompson is periodically a bit bombastic in her parceling of beats, but her partners in the rhythm section do a good job of evening the dynamics out. Trumpeter Sean Jones brings some high caloric brass effects to the second, his first of four appearances in the set. Obligatory funk arrives with the circular-structured “Ebb & Flow” as Royston turns to liquid Rhodes and Christian McBride guests on electric bass, slapping out a juicy groove and engaging Sullivan’s acoustic strings in friendly fisticuffs near the tune’s close.

Fuller dives into the opening minute of “I Can’t Get Started” without a net and embellishes modestly on the theme before a lush ensemble entry enhanced once again by Rhodes, guest Warren Wolf on vibes and McBride again, this time nimbly negotiating upright. The subsequent light bossa fare of “Kissed by the Sun” and “Shades of McBride”, while decent vehicles for Fuller’s flute and soprano, doesn’t equal the incisiveness of the earlier numbers. The set culminates a romp through “My Shining Hour” where Thompson’s enthusiasm on the sticks proves an asset in prodding the leader into some of the most unfettered playing of the session. In her potent mixture of blues, gospel and R&B-inflected jazz, Fuller doesn’t stray outside what could safely be called mainstream parameters, but venturing beyond isn’t her intent. Laying down accessible expressive sounds is, and in that sense she certainly succeeds.
Posted by derek at 4:32 AM