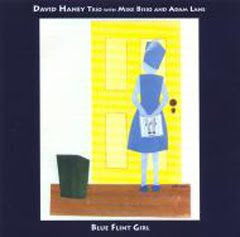 Canadian pianist David Haney isn’t reticent about diving into the deep end when it comes to challenging settings for his instrument. He’s regularly explored novel combinations, notably a duo with trombonist Julian Priester, along with the conventional context of bass and drums accompaniment. Even in familiar piano trio surroundings, his approach avoids the easy or ordinary. Additional mitigating factors for this particular date included regional record highs in heat and humidity and a recording space that offered only minimal ventilation.

This disc is actually the second from a two-day session in Canton, NY, CIMP’s off-site source when a piano’s involved. The first, Blues Royale, focused on a cache of radically-retooled Pre-War rural blues songs. This one turns the lens to eight Haney compositions and a collective improvisation. The other elephants (or perhaps more accurately, panthers) in the room for Haney are bassists Adam Lane and Michael Bisio. Haney’s roots are in modern composed music and while he’s developed a formidable jazz-based improvisational language prior to and across a series of sessions for CIMP/Cadence his faculties in that area still aren’t quite on par with those of his partners. Such an observation is a hardly a slight given the superlative level at which Lane and Bisio usually operate and the fact that they’re each on their A-game here.

Haney seems to recognize the variance from the onset, holding down the stereo middle as Bisio and Lane race, cavort and hammer away at their instruments at his flanks. There are points where either or both bassists almost sound possessed when gauged by the energy and intensity they mete out through their strings. Lane, in particular, is a marvel, his shearing arco work on “Little Hat Stomp” and his pummeling pizzicato groove on “Coyote Learns to Whistle” representing peak performances on the bull fiddle. Producer Bob Rusch somberly notes in his liners that Bisio even experienced a minor heart attack two days after the session. Neither is content with a sideman’s role and Haney actively encourages them to assume the lead and pull out the stops on numerous occasions.

Buffeted between the twining and eliding typhoons and contending with the cumbersome air of the recital hall on top of that, the pianist’s perambulating lines are sometimes nearly subsumed. These are pieces best revisited repeatedly in order to even partly glean the all of what’s going on. In that sense Haney comes out ahead, his compositions gratifying grist for the ensemble’s super-charged scrutiny.
Posted by derek at 6:41 AM