Wayne Brasel Quartet - If You Would Dance (Universitetet Stavanger) 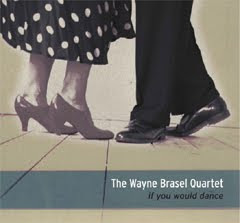 Self-released but hardly rough-hewn in production design or packaging appearance, guitarist Wayne Brasel’s latest is a smooth listening experience from start to finish. The dancing feet that adorn the cover give a visual clue to Brasel’s basic aesthetic. Lightly swinging with clean rounded corners in common with what follows, the opening “Lightgiver” revolves around his grit-free plectral approach. Pianist Alan Pasqua comps behind the shimmering single note leads while bassist Tom Warrrington jogs the middle with plush but unobtrusive pizzicato patterns. Brasel’s choice of luminous amplification almost gives his deft picking the semblance of chordal strums. Drummer Peter Erskine, alumnus of numerous ECM sessions is an copacetic pick for the drum chair. His relaxed, but busy, cymbal-dominate rhythms further aerate the pieces and give the music an effervescence in agreement with Brasel’s cozy compositional style.

Recorded in Santa Monica during the summer of last year, the date exudes a sunny optimism reflective of its site of origin. Brasel’s pieces hew closely to an easygoing delivery. The playing by all four principals colors within the lines prescribed by these parameters. By the onset of “Celebration” the album’s fourth track and an up-tempo romp built on another bouyant bass line and Erskine’s crisp ride cymbal, the homogeneity of Brasel’s concept begins to compromise the listening experience. A comparatively dramatic drum break upsets the figurative applecart for a moment, but the foursome is soon back to their collective brand of lustrous swing. Even a switch to acoustic strings for the Latin foray “Oleo de Mujer con Sombrero” does little to shed the pinions of sameness that bind the session. The closing “The Hermit” is a notable exception as the quartet welcomes guest tabla player Satnam Ramgotra and navigates moodier, modal territory that sheds the sunny cheefulness so prevalent on earier pieces.

Seemingly Windham Hill-ready, this fare falls outside my usual taste preferences and likely has a large part in my construing it in a negative light. The musicanship by all the participants remains solid. It’s the material that settles too often into the soporifically safe and subsequently comes across as unsatisfying in sum.
Posted by derek at 9:34 AM