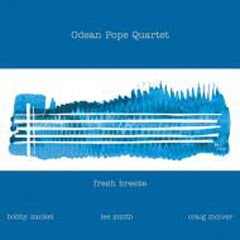 Odean Pope records are old reliables. Such shorthand is not meant to argue anything safe or rote about the entries in his discography. Rather it’s meant as an assertion of principled dependability across the board. Put on a Pope album and you’re guaranteed some gold-standard tenor playing at a minimum. Fellow Philadelphian Bobby Zankel has a comparable reputation earned in similar fashion. Both men have benefited from a long association with the Cadence stable of labels. Zankel, in particular, has the bulk of his catalog ensconced on CIMP and CJR. This new set isn’t their first conclave. That distinction goes back nineteen years to Zankel’s debut on CJR.

Pope’s ostensibly in the driver’s seat this time out and contributes all of the date’s eight compositions, but the performances reveal an equal opportunity mindset amongst the players. Bassist Lee Smith and drummer Craig McIver, each regular Pope associates, share equal footing with the horns. Smith, in particular, is a minor revelation. Past employers as varied as Mongo Santamaria and Roberta Flack illustrate his stylistic versatility, but it’s the earthy sense of groove and rhythm he brings to his pizzicato play that truly stands out. McIver’s polyrhythmic propensities jibe beautifully and there are frequent passages where the rhythmic interactions are just as catalytic as the harmonic and melodic ones issuing from the frontline.

Several of the pieces are familiar friends from past Pope ventures. “Rejuvenate” works off a springy second line rhythm with Pope and Zankel digging in. The leader’s scalar approach rooted in Coltrane’s “sheets of sound” is in full effect. Zankel’s tarter-toned, but no less agile alto makes for an excellent foil. “Limu” spreads out on a modified samba beat, opening space for some of Pope’s signature circular breathing. The closing series of exchanges on “Fresh Breeze” contain what sound like a pair of aborted entries by the horns, but the muscularity of the McIver’s breaks makes the near-mistakes negligible. Pope and Zankel continue unruffled, both secure in the knowledge that those sorts of calculated risks are what jazz is all about.

On the Ornette-ish “Off If Not”, one of those aforementioned time-tested numbers, Pope’s solo is bursting of highly-personalized little moments. A hardening of his tone into legato honks here, a succession spiraling glissandos there. His phrasing may be built on a bedrock of Coltrane, but the improvisational edifices he erects off the foundation are wholly his own. Zankel zooms in and follows suit, bouncing and bobbing atop the choppy accompaniment of Smith and McIver while voraciously chewing up notes at comparable speed. A delicate syncopated dialogue between brushes and bass follows as gravy on an already savory performance. With this opportune set Pope’s reliability record remains intact.
Posted by derek at 7:52 PM