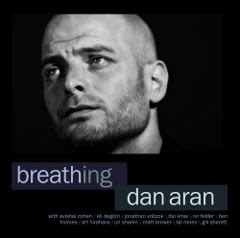 Drummer Dan Aran chose the title to his debut disc with an eye toward metaphor and concision. His is a carefully-constructed percussive approach that studiously avoids bombast and ego in favor of naturalistic style that rises and recedes in a manner akin to respiration. For a leader and drummer that’s a comparatively rare tack to take, but one that yields immediate rewards. Born in Jerusalem, Aran was a fixture on the Israeli circuit until his move to New York in 2001. He soon came under the spell of Smalls and the tutelage of pianist Harry Whitaker. Nine years later, he still gigs frequently with his countrymen, a number of whom lend able assists on this disc.

The disc’s ten pieces present Aran in a number of invigorating contexts ranging from trio to sextet. Pianist Art Hirahara is the near constant, appearing on all but one of the tracks. Trumpeter Avishai Cohen (not to be mistaken with the bassist of the same name) and trombonist Jonathan Voltzok share the frontline on four cuts starting with the first two, which each develop in modal suite-like fashion. Bassists Matt Brewer and Tal Ronen divide duties down the middle with each supplying elastic support on an even number of cuts. Saxophonist Eli Degibri is on deck for three, his warm tenor a dominant voice on a sally through “I’m So Blue” while Eastern-influenced soprano holds sway on the Aran original “Riva”.

Aran leads from a position of restraint, his supple patterns guiding the performances, but just as often receding to background to allow his partners to dictate direction. He also shows affinity for colorful surprises, such as the sudden appearance of guitarist Nir Felder’s tasteful feedback-laced solo on the opening “Sun Bath” or the entrance of Gili Sharett’s bassoon as sole horn on the exotica-influenced rendering of “I Concentrate on You”. Accordionist Uri Sharlin contributes to the Klezmer-tinged “Gul Lihibib”, doubling on piano for a stage-setting preface in Hirahawa’s stead. The tune is also a showcase for Aran’s adroit dumbek play.

“Para Ezequiel”, one of two piano trio tracks, is a perfect example of Aran’s less-is-more philosophy. Hirahana and Ronen take the foreground as the leader lays back, inserting just the right brushed beat and accents around his partner’s more prominent lines. Aran decelerates the tempo and sands off the sharp angles on Ornette’s “The Blessing” for a smooth-gliding rendition that wouldn’t be out of place at a summer cotillion. Cohen and Voltzok negotiate the bluesy theme in lubricious concert and Hirahara comps with a clean balanced touch. With this varied and distinctive set Aran succeeds in presenting a series of appealing essays on his art that pique interest in hearing more.
Posted by derek at 4:34 AM