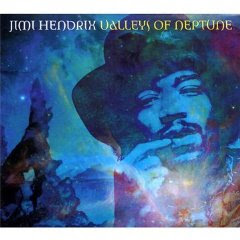 Please excuse the prevalence of first-person commentary in this piece, but it just seems the smoother route to go in describing my personal reactions to this release. The commodification of Hendrix continues with this latest posthumous collection of odds and sods on the Sony-licensed Experience Hendrix imprint. I’ve lost track of the legal-wrangling within and without the Hendrix family and at this late date it really doesn’t matter that much. A few truly revelatory releases have surfaced under the Dagger Records offshoot that they started, most notably Morning Symphony Ideas, which documents informal and protracted improvised sketches by the guitarist and drummer Buddy Miles, and Burning Desire, which includes my favorite Hendrix studio performance, “Record Plant 2X”. On the flipside of that stewardship is the Vatican-worthy assemblage of merchandise that bears Jimi’s name and/or visage: everything from water bottles and diaper covers to incense and air fresheners. That arguable exploitation is fodder for a different screed so back to the music here.

The “previously-unreleased” tag attached to the disc as a chief marketing device is in actuality only valid in a loose-sense. Nearly all of the dozen tracks will be familiar to most Hendrix fans. All but one track originates from studio sessions in 1969. That song, “Mr. Bad Luck” is actually an earlier of version of “Look Over Yonder” (from South Saturn Delta) with later-recorded bass and drum parts added. Similarly, “Ships Passing Through the Night” is a reworking of “Nigh Bird Flying” (from First Rays of the New Rising Sun). “Fire” doesn’t diverge drastically from the original ’67 album take save for an extended guitar break as a positive, and a boost in Noel Redding’s warbly backing vocal as a minus. “Red House” fades out inexplicably and vexingly just prior to the punch line that makes the song such a feather in Hendrix’s hat to begin with. An instrumental breakdown of Cream’s “Sunshine of Your Love” contains some decent guitar riffing, but it crumples in comparison to concert versions like the one recorded at Winterland four months earlier.

True to form, the powers that be have also licensed a limited edition expanded version of the set only procurable at Target stores. Two more instrumentals, “Slow Version” and “Trash Man” increase running time to just south of 75-minutes. Even with the Dr. Frankenstein-approach applied to much of the music in the set there’s no denying the thrill of hearing Hendrix running down his ideas in the studio, particularly in the company of kindred spirit Mitch Mitchell who handles cans on all the cuts. That pleasure goes a long way in alleviating any pangs due to the perceived cash-in elements underscoring this compilation. Hendrix fiends (and I count myself in this hopelessly-addicted cadre) will pick it up sound unseen. There’s enough killer blues fretwork on cuts like the Elmore James cover “Bleeding Heart” and “Hear My Train A’Comin’” to outweigh the cobbled-together construction of other tracks.
Posted by derek at 6:45 AM