Champian Fulton - The Breeze and I (Gut String) 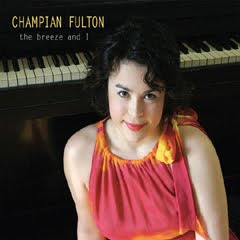 As is the current lot of jazz writ large, singers in the idiom rate comparatively low on the public awareness and consumption charts. There are arguable exceptions like Diana Krall and if the definition is particularly inclusive, Norah Jones, but most of the time vocalists are in the same boat as their instrumental brethren. Even that waning bellwether of pop music celebrity, American Idol, gives the deep jazz vocal tradition only passing notice, usually hidden in the colloquial-hinged platitudes of erstwhile arbiter Randy Jackson.

Champain Fulton has a few things going for her that improve the odds. First, she’s a competent instrumentalist herself, playing piano in an energetic two-handed touch that harkens back to classic stylists like Hank Jones and Horace Silver and not shy about stepping up for frequent solos. Next, there’s her pipes that while not spectacular have an insouciance and verve that exudes easy charm. Ella and Anita are obvious influences and she also names the great King Cole as the patron saint of her piano trio project.

Her taste in sidemen and songbook are also admirable. Bassist Neal Miner, a Smalls regular and leader in his own right who also does duty as co-engineer, lays down a supple walking groove on numbers like a strutting takedown of the Harold Land-scripted “Land’s End”. Drummer Fukushi Tainaka exercises a similarly elastic approach to time keeping working adroitly on both sticks and brushes. Neither man gets in Fulton’s way during her frequent forays up and down the keyboard and measures momentum in an exacting fashion.

Touching again on trio’s taste in material, the 13-song set list is weighted towards standards of varying vintages. Fulton refuses to treat any of them as relics or museum pieces. Her brisk exploration of “The Sheik of Araby” is a handy example, no dust-dappled swing heirloom to be found here. Tainaka’s locomotive brushes solo alone brings the hoary tune a new millennial finish. Fulton’s style of music isn’t my usual stomping grounds, but I found much to savor here.
Posted by derek at 7:20 AM