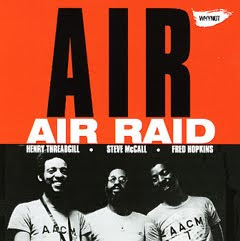 Cue the bugles and bata drums: We’re in the midst of a full blown Henry Threadgill renaissance thanks to a recent compiling of the multi-reedist/composer’s Black Saint/Soul Note albums and another from Mosaic gathering his work for Arista, RCA and Columbia slated for the immediate horizon. Add to that copious bounty the reissue by Candid of a pair of AIR dates on the Japanese Why Not label and nearly all of the man’s major works magically return to print, at least for the time being. An AIR extravaganza (thankfully not a name chosen for an album during their tenure) is in full swing while Threadgill’s current creativity continues to find a consistent conduit via the Pi imprint.

As with the new edition of Air Song from last year, this set is a no frills affair in terms of packaging and annotation. It’s just a straight reissue of the album’s four tracks, two per LP side in the original 1976 pressing. Threadgill fields Chinese musette and alto on the title opener, using the first instrument to intone shrill sustained siren effect over a thick bed of arco bass and sharply-fizzing cymbals. Bassist Fred Hopkins’ gains a rubbery bounce through amplification, but the crux of his deep earthy sound doesn’t hinge on that crutch. His massive harmonically-rich patterns echo the counterintuitive corpulence and agility of Wilbur Ware and apply strenuous percussive force to his instrument.

“Midnight Sun” gives over to more alto, its opening minutes working off a surprisingly “inside”-sounding vamp. “Release”, the album’s lengthiest piece, finds Threadgill on flute and the hubkaphone, the second a percussion instrument hand-cobbled from hubcaps that sounds like a junkyard gamelan variant. McCall’s cymbal-centered textures swirl and eddy, but the piece loses keen focus in a few places despite several spates of mercurial melodic improvisation by Threadgill and another arresting solo from Hopkins’ that pitches a perfect balance between burrish bow strokes and febrile finger plucks. “Through a Keyhole Darkly” downshifts to a closing vehicle for grayscale tenor and shuffle boil rhythm highlighted by another stellar statement from Hopkins.

The original line-up in AIR had a relatively truncated tenure and that transience makes all of their albums worth owning. This classic set registers among the best thanks mainly the shared acuity of concept and execution.
Posted by derek at 9:35 PM