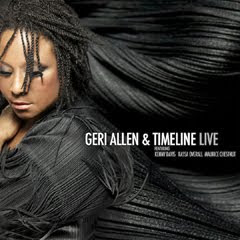 Pianist Geri Allen is in the midst of an artistic and creative roll. Recorded at Oberlin Conservatory, this densely-packed and highly satisfying performance follows the release of a solo recital, also on Motéma and carries forward in a similar vein with some marked departures. Chief among them is her crew of assembled accompanists. Bassist Kenny Davis competes a bit with the cavernous acoustics of the concert hall and there are moments during the more stentorian ensemble passages where his strings endure compromised audibility though fortunately his solo passages suffer no such hindrances. Conversely, drummer Kassa Overall has no problem being heard, his aggressive percussive patterns regularly matching Allen’s in terms of momentum and volume.

The inspired ensemble wildcard is tap dancer Maurice Chestnut, conscripted in part to contribute and embody the project’s focus on honoring African American dance traditions as well as those of the music realm. Allen name checks a good dozen luminaries in either artistic arena as sources of inspiration among them the likes of “Bojangles” Robinson, Ornette Coleman, Gregory Hines and Betty Carter. None explicitly manifest in the music, but Allen makes other referents abundantly clear in her set list choices. A lengthy contrafact of her “The Western Wall” and Mal Waldron’s “Soul Eyes” spools out over nearly a third of an hour. Later it’s a suturing of Gershwin’s “Embraceable You” and Billie Holiday’s signature “Loverman”, each filtered through Allen’s grandly rhapsodic lens.

“Philly Joe” echoes its namesake in the opening snare shot from Overall. Much of the piece’s second half gives over to a dialogue between the drummer and the clickety-clacking tap play of Chestnut and the pair very nearly wears out their welcome. The two paired-tune medleys follow broken by the shorter interstitial pieces “Four By Five” by McCoy Tyner and the original “LWB’s House”. On both Chestnut once again asserts himself, his steel-heeled syncopations blending nimbly with Overall’s stampeding kit constructions. Like Davis, there are moments where he has step lively to compete with the pounding surf generated by the drums, but more often than not ably holds his own.

Allen directs the action like a matriarch at an extended family picnic, marshalling each piece and each of her sidemen for maximum potential. It’s a by turns exhilarating and exhausting journey, but audience rewards far outweigh expenditures in the final tally. Passionate and magnanimous in her musical explorations, Allen wouldn’t have it any other way.
Posted by derek at 5:44 PM