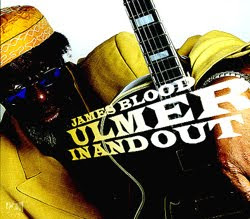 A rare case of record title matching record label, James Blood Ulmer’s latest carries that parity over to the music by not tinkering much with the successful strategy of past outings. Fronting a trio session, Ulmer’s guitar positions up front with athletic support from bassist Mark Peterson and drummer Aubrey Dayle in close proximity. Peterson plucks both electric and acoustic instruments and his corpulent lines on the former are a sturdy undercarriage to Ulmer’s snaking, seething blues leads and dart-tipped arpeggios. Dayle keeps the backbeat tight and responsive, bubbling and frothing around and beneath the strings.

Lyrics and vocals have long occupied a position peripheral to Ulmer’s stinging plectrum and that guiding dynamic is no different here. “No Man’s Land” muses on geopolitical turf wars while the slow shambolic shuffle “Maya” tells a tale of the titular muse through an economy of words. Neither is a case of superlative verse, but both get the job done. “A Thing for Joe” revolves on a constrictive groove, Ulmer ramping up and reeling down the tension before a tumbling drum break from Dayle and an unexpected return by the leader on flute that’s more than proficient. Peterson, on upright, tugs out a short chugging solo before a full circle ensemble finish.

“Fat Mama” recycles another flexible riff from the Ulmer fake book, spooling out in prickly tendrils coated in brittle amplification. An about-face into hard-edged funk built on snare suspensions and a killer percolating bass groove compensate for another round of suspect shout-sung vocals. “Eviction”, “High Yellow” and “Backbiter” unfold as loose-limbed bebop-rooted shuffles that prove Ulmer’s undiminished prowess in personalizing the idiom while “Baby Talk” and “My Woman” amble agreeably along on quotidian blues changes. Peterson’s bass closely shadows Ulmer in each context while Dayle lays down potent and punchy snare and crash cymbal-dominant rhythms.

The packaging trades up explanatory prose for colorful visuals with close-up shots of the band taking the place of liner notes or other annotations. Ulmer looks sharp in a mustard-colored suit that mirrors that of Mayfield on the cover of Curtis and his alligator boots give further indication of his fastidious fashion sense. At this stage of his long-storied career, he knows what works and what doesn’t and the adage that starts with “if ain’t broke…” is as good a playbook page to work from as any to give the people what they want.
Posted by derek at 1:20 PM