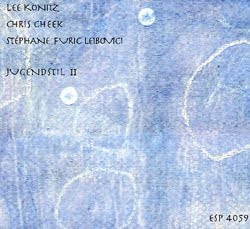 How to improve on an already winsome formula? Such was a question facing producer Jim Black and bassist/composer Stephane Furic Leibovici in the wake of their first chamber jazz project for ESP. The answer came in an unexpected and inspired conscription, altoist Lee Konitz. Konitz has been influential party to these types of projects for well over a half-century as a melodic improviser nonpareil. His presence in the company of Leibovici and saxophonist Chris Cheek, here sticking solely to tenor, raises an already high bar several notches higher.

Leibovici’s spacious though spare compositions afford the players plenty of latitude for personal expression. The first several focus on the three with Konitz and Cheek evenly parsed into stereo channels, but often employing for a similarly gauzy tonality in their improvisations. Leibovici holds the center with skeletal walking notes placed like floating buoys of commentary between the saxophones twining and eliding lines. The resulting music is austere without being antiseptic, introspective without being hermetic and obliquely recalls the kind of aerated weave of melody and harmony that Konitz used to specialize in with Warne Marsh.

“A L’ile de Freesanges (…Nuit D’Été…)” signals a considerable change in the ensemble with the addition of a handful of support players. Black comes off the sidelines and sounds off on glockenspiel, fielding vibes and chimes at other junctures. Joy Plaisted on harp and Margja Garcia on celesta insert additional tonal colors. Dan Dorrance and Chris Speed join the horns on flutes and clarinet respectively, bolstering the leads and guiding the pieces for brief stretches as well as with Dorrance’s turn on “Phongsaly”. The mixture harkens back to Konitz’s 1958 atmospheric collaboration with strings, An Image in its assemblage of dulcet chamber elements and calmative but responsive chamber components. Black summarizes the set as “over-all-too-soon”, an observation that resonates perfectly with my own reaction.
Posted by derek at 6:24 AM