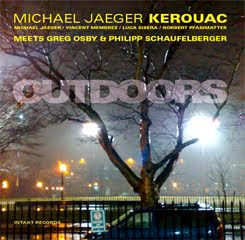 Michael Jaeger’s ensemble makes explicit reference to one of the founding fathers of Beat poetry, but the Swiss tenorist is also careful to note that his actual inspiration source rests in the Dizzy Gillespie’s composition of the same title. Now five years on since their inception the foursome is well-oiled improvisation machine. Pianist Vincent Membrez, bassist Luca Sisera and drummer Norbert Pfammatter don’t answer well to the summary of sidemen. Jaeger’s name adorns the case spine, but the session is very much a group effort.

Tight shifts in meter and seamless ensemble interaction exemplify several of the eight pieces in the program. The opening “Tanz” threads in African rhythmic elements with a pliant vamp that harkens back to classic Blue Notes in its mix of bop momentum and township attitude. Jaeger’s breathy tenor blows a cool breeze against the percolating beat as guitarist Philipp Schaufelberger, the session’s other guest who contributes to all but two cuts, keeps easy pace with his compatriots. Shadowing Jaeger with ringing tones on the lovely “Flexible” he contrasts cannily with the clattering tumble from the Pfammatter and Sisera that brackets Membrez’s pedal-weighted commentary.

Altoist Greg Osby is an obvious influence on Jaeger’s methods of composition and as such makes for a natural and copasetic conscript on half of the tracks starting with the lilting postbop balladry of “Goldfaden”. Their stacked unisons and harmonies maximize the group’s lyrical tendencies pivoting nimbly off the tension rooted in Pfammatter’s fluid stick play and Membrez’s swirling chordal anchors. “Daha” expands from sharply wound dissonance of dampened and bent strings in its opening minutes, an assemblage that sounds sharply like the early work of Joe Morris, into another fertile playground for the horns in tandem and solo.

“Schwarzes Eis” and “Frein Fünf” suggest another side of the group’s ethos as texture-saturated pieces that avoid any sort of constricting meter or scripted symmetry. They don’t register quite as memorably as their brethren, but folded into the whole add appreciably to the date’s diversity. “Kluss” and the suite-structured title piece take the set out with a double shot of scintillating, sextet-rendered postbop and more Jaeger/Osby creativity congruity.
Posted by derek at 4:20 AM