Kenny Burrell - Be Yourself (High Note) 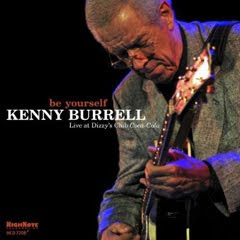 Advancing age has a disquieting habit of eroding jazz relevancy. Stars of the hardbop era alive today have to wrestle with bodies of work that can easily become millstones attached to their creativity. The old specter of diminishing returns isn’t some harmless haint. Still performing and recording in his 78th year, guitarist Kenny Burrell knows these potential dangers firsthand. His playing from the mid-Fifties onward set a standard for bop-based fretwork, but six decades on it’s a style that’s arguably been done to death. On this live date, recorded at Dizzy’s Club Coca-Cola, the small club venue inside Jazz at Lincoln Center, in the fall of 2008, Burrell hedges his bets with some astute preparations.

First there’s the band of comparative young bloods in his employ. Tenorist Tivon Pennicott pulls from a Sonny Rollins bag while still plying his own sound and also doubles on feather-dusting flute on “Listen to the Dawn” and that shows a Lew Tabackin influence. Pianist Benny Green and bassist Peter Washington are seasoned session pros and each injects healthy doses of testosterone into the readings of the charts. Rounding out the band is drummer Clayton Cameron, who works equally well on galloping sticks or pattering brushes. The guitarist sounds inspired by their company for the opening takedown of “Tin Tin Deo”, an old favorite of his set lists dating back to the classic Five Spot date for Blue Note in ’56.

Second in Burrell’s favor are the acoustics of the venue and their savvy capture by an engineer identified only under the enigmatic cipher JediMaster. The recording exhibits an excellent spatial presence with the clink of glass and plate ware clearly audible but hardly intrusive. The audience is an experienced one, keeping their applause and conversations to the appropriate moments and giving the music full attention. Even on up-tempo numbers, like an inspired rendering of the Kenny Dorham chestnut “Blue Bossa” that works as an edifying feature of Cameron’s percussive prowess, the instruments retain their independence and presence. Burrell’s picking is still sharp as a tack shifting from felt-tipped chords to ballpoint single notes without missing a beat. No tired retreads here. The satisfying session leaves off with a simple certainty intimated by its title: Being Kenny Burrell is still enough.
Posted by derek at 5:49 PM